History
The 3484 operating box car was introduced in the same year as the highly successful 6464 series box car, 1953. The main difference is the 3484 includes an operating mechanism simulating a man opening one of the box car doors.

The 3484 box car is available in two different roadnames. The slightly more common roadname is the Pennsylvania while the A.T. & S.F. (Santa Fe) is a bit harder to locate. Lionel's official catalogue number for the Santa Fe is 3484-25 -- which is also the number appearing to the left of the opening door. Either 3484 car in collectable condition is becoming harder to find.

Features
Standard features of the 3484 cars include: painted body (tuscan for the Pennsylvania and orange for the Santa Fe), white lettering, bar-end trucks, single brakewheel plus an operating door with a rubber man on the inside of the car.

Pennsylvania - Shown in the photo above - Produced for only a single year and is somewhat common.
A.T. & S.F. - Almost all Santa Fe's have white lettering, however a very small production run in early 1954 contain black lettering. The black lettered version is rare -- and should have single block doors. 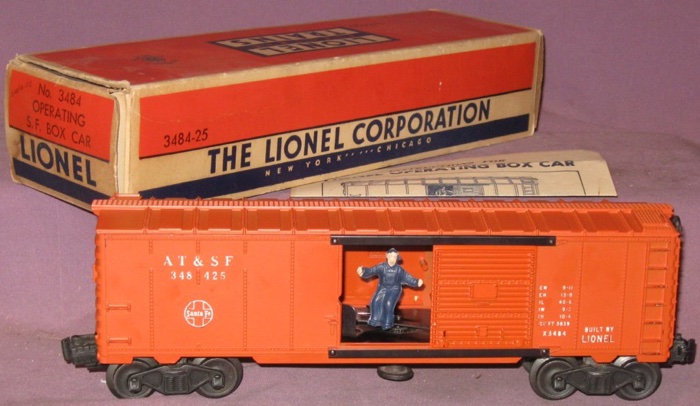