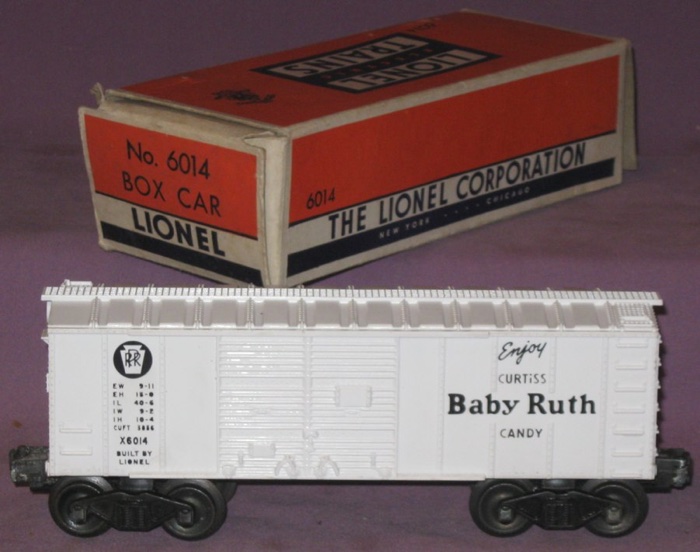 History
The 6014 short box car has the distinction of having the longest life and the most roadnames of any single box car. All 6014s are frequently referred to as plug-door box cars. During its nineteen-year life it experienced numerous changes. This web page will identify a cross section of most of the variations. We will list the available roadnames and/or advertisers and characteristics associated with all of the 6014 box cars.

Features
Standard features of the 6014 include: molded color body (which changed depending upon the variation), metal frame, non-opening doors on each side and a single simulated brakewheel molded as part of the body.

Additional Detail, Photos & Box Information
The white Frisco box car is the easiest 6014 box car to locate. The most difficult one to find is the uncatalogued Wix Filters from 1959. The length of these short box cars are approximately 8 1/2" long (coupler to coupler).

The following list is in the order of year of introduction.

Baby Ruth / PRR - White version shown in the photo above - Produced from 1951 - 1956. The most common version came with an unpainted white body and black lettering. For 1951 it was equipped with staple-end trucks and then bar-end trucks from 1952 - 1956. This is the only 6014 version to have a leading prefix of X, with 'X6014' printed on the car. There is a hard-to-find version with an unpainted red shell and white lettering. Researchers believe the unpainted red version was produced only in 1956.

Chun King / PRR - An uncatalogued item from 1956 and only available in one uncatalogued set. It is found with an unpainted red body and white lettering and alway included bar-end trucks. This is a very difficult car to locate.

Frisco - First produced in 1957, the 6014 remained in the catalogue up to the end of the postwar era in 1969. During these 13 years, the 6014 was manufactured in several different color and truck combinations. 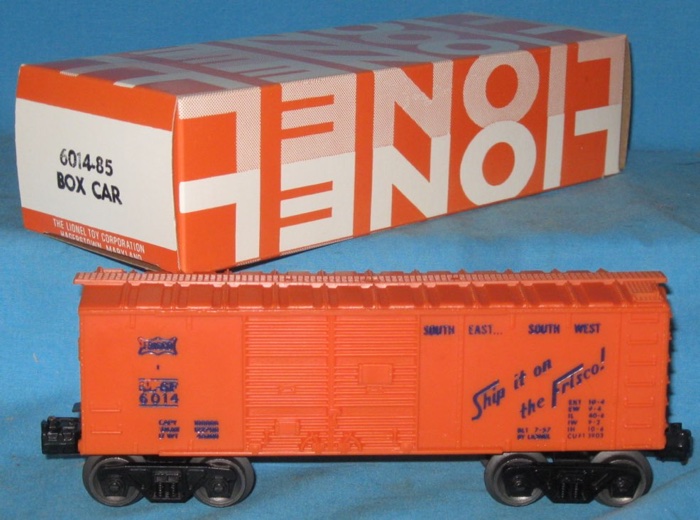 Airex - Produced as an uncatalogued item in 1959. It came with an unpainted red body and white lettering and AAR trucks.

Wix Filters - Produced as an uncatalogued item in 1959. It came with a white body and red lettering and was only available in one uncatalogued set. This is the rarest of all 6014 box cars.