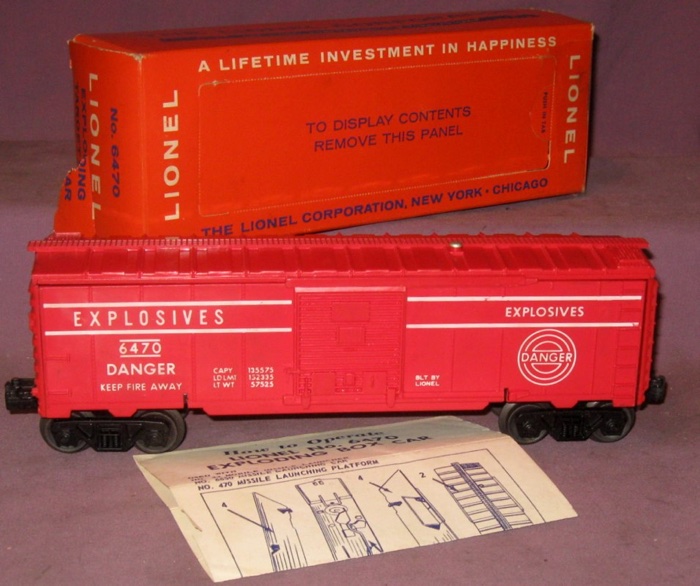 History
The 6470 Exploding box car is another innovative operating boxcar produced by Lionel. It uses a modified 6464-series box car with an ingenious mousetrap type mechanism mounted to the interior frame. When the car is hit on the outside, the mechanism is engaged and the boxcar explodes with the two long sides and roof flying off of the car!

Although it was not apparent at the time, the 6470 was one of the first items manufactured by Lionel and included in the Space and Military series. This term -- Space and Military series -- was not used by Lionel, but rather by experienced operators and collectors. It generally includes all of the odd and unusual items produced by Lionel which were rarely, if ever, seen on real railroads. Other examples include the 3619 Helicopter Reconnaissance car, 6448 Target Range boxcar and 6650 Missile Launcher flatcar.

Features
The 6470 used a modified version of the 6464 style boxcar shell. It was an unpainted red boxcar shell with painted white lettering. The roof and long sides were removable. There is a mousetrap mechanism (be careful with the little children!) mounted to the interior and it is secured in the 'off' position by placing a thin silver rod through the roof and into an opening in the base of the frame.

Additional Detail, Photos & Box Information
The 6470 is almost identical to the uncatalogued 6480 Exploding boxcar from 1961.

Only Known Variation - Shown in the photo above - All 6470's have a red shell with white lettering. There is a minor mold difference on the interior of the long sides, however neither version is harder-to-find than the other and there is no difference in value. Shown below is the opposite side with slightly different graphics: