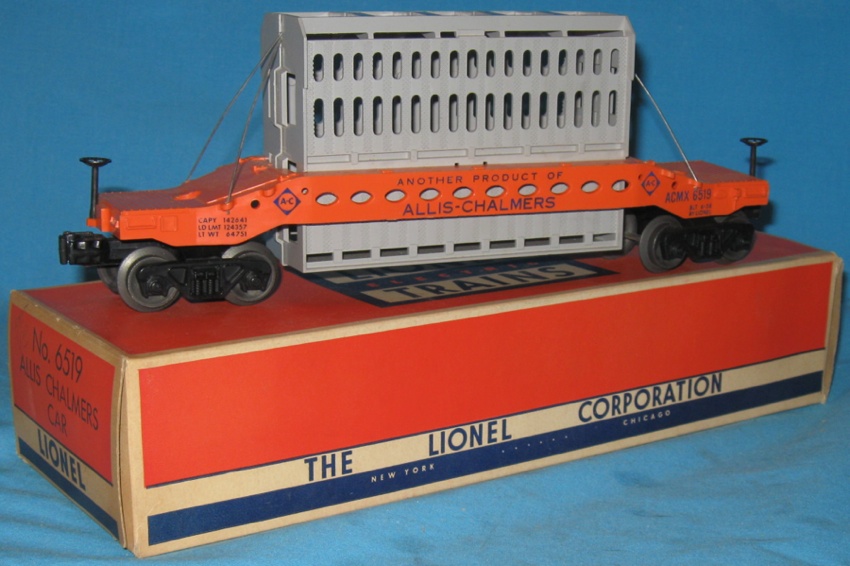 History
The 6519 Allis Chalmers Condenser Car was produced for four years and was included in several catalogued sets as well as being available as a separate sale item. This freight car is modeled after a real-life car used to transport industrial condensers. The 6519 has a unique look and profile and with its humped-up frame and large load, the car will make quite an impression on your layout.

Although this car had a long four-year production run and is easy to locate, it's almost always missing one -- or both -- brakewheels. Locating a complete, original 6519 with both brakewheels intact and not damaged nor repaired is rare. Additionally, a complete, solid original box for this Condenser car is somewhat rare.

Features
The 6519 Allis Chalmers Condenser Car contains the following standard features: unpainted orange frame with blue lettering, gray condenser, metal simulated tie-down straps at each end plus AAR trucks riveted directly to the frame. Finally, there is a brakewheel and stand at each end -- which is generally broken, repaired or missing.

Only Known Variation - Shown in the photo above - All 6519 Condenser cars are molded orange with a gray condenser and AAR trucks.