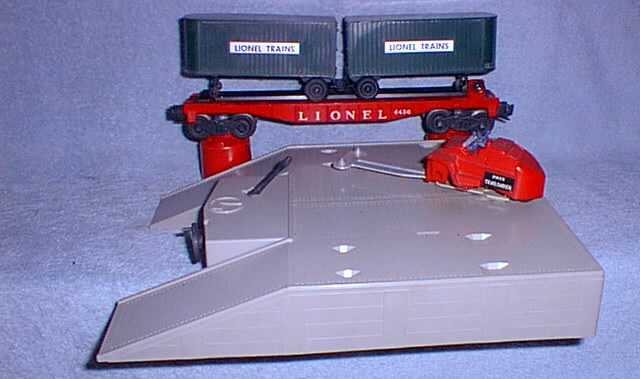 History
The 460 Piggyback Transportation Set is an interesting and partly historic accessory. It has become the forerunner of today's intermodal crane. Who could have predicted Lionels original Trailer-On-Flatcar (TOFC) transportation mode of 1955 would become the backbone of real-life railroading!

The Piggyback Transportation set is fun to play with -- but lacks much of the excitement usually accompanying Lionel's electrically operated accessories. When introduced by Lionel in 1955 it was a low-budget accessory. Locating a complete and intact set will require some time as many of the original vans are either completely missing or missing a portion of the stickers or side emblems.

Features
The 460 Piggyback Transportation set has the following standard features: gray plastic base, red fork-lift tractor with a blue man and two die-cast manually operated levers on the base. The blue man operating the tractor is frequently missing from this accessory. Additionally, 'Ross Trailoader' appears on each side of the tractor.

Also included with the accessory is a 3460 flatcar with two vans. The flatcar was always red with a low black metal structure running almost the entire length of the flatcar. The vans were green and included several emblems. The side emblems were metal with the lettering 'Lionel Lines' while the front had a stick on emblem reading 'Fruehauf'. Many of the Fruehauf emblems have become separated and are now missing from the vans.