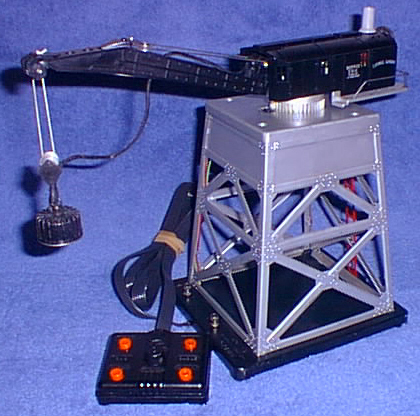 History
The 182 Triple-Action Magnet Crane is an updated version of the prewar 165 Magnetic Crane. Externally, the obvious change -- when compared to the 165 -- is the addition of a more realistic cab and boom. The 182 used the cab and boom assembly from Lionel's then current production crane car -- the 2460. The 182 crane is designed to reside next to a section of straight track and can unload metal objects with its electro-magnet.

Action of the 182 crane via the controller includes: cab rotating to either the right or left; the hook being raised or lowered; and the magnetic being turned on or off. As for raising or lowering the boom, that is a manual effort by rotating the crack protruding from the rear of the cab.

Features
The 182 Triple-Action Crane has the following standard features: gray metal superstructure with a red ladder, black bakelite base, black cab and boom and a smokestack. The smokestack is usually gray, however some black smokestack versions do exist.

The controller has four buttons with an rotating on/off switch in the center. The buttons are generally red, however black or green buttons have been documented as being original buttons.

Gray Smokestack - Shown in the photo above - The common production version.
Black Smokestack - Assumed to be a later production item, probably for only a portion of 1949.
Controller Buttons - Red buttons are the most common. However black or green buttons will command a slight premium.