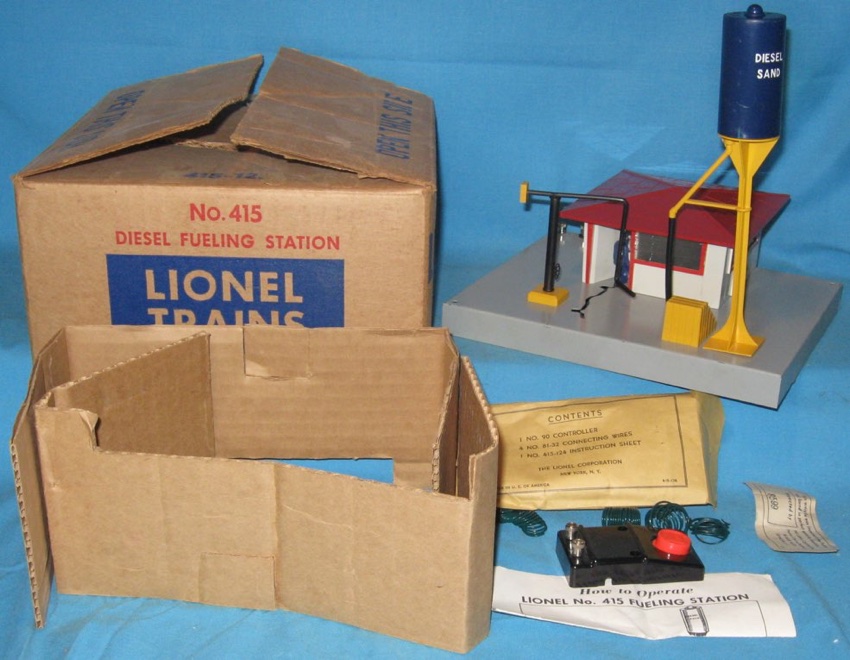 History
Lionel continued the postwar 'men at work' theme in 1955 with the new 415 Diesel Fueling Station. This station's attendant tirelessly refilled Lionel Alco's, switchers and F3's as they stopped at his station for fuel.

The Diesel Fueling Station is a prototypical and reliable accessory. Unfortunately, it never achieved the popularity of other 'men at work' accessories or freight cars produced by Lionel. The general criticism of the 415 is the restricted viewing access of the accessory while in operation. Realistic operation required a diesel to stop in front of the accessory. Thus the man became blocked by either the diesel or the accessory building.

Advanced collectors believe the 415 station was only produced in 1955. Due to poor sales or low demand (or both), the accessory remained catalogued through 1957 in an effort to sell remaining inventory.

Features
The 415 Diesel Fueling Station has the following standard features: gray metal base, white building with a red roof, yellow and blue fuel tower and a blue man.

Lionel provided a # 90 controller with the accessory for on / off operation.

Only Known Variation - Shown in the photo above - All fueling stations have a gray metal base, white building and red roof. There are no known variations to this accessory.