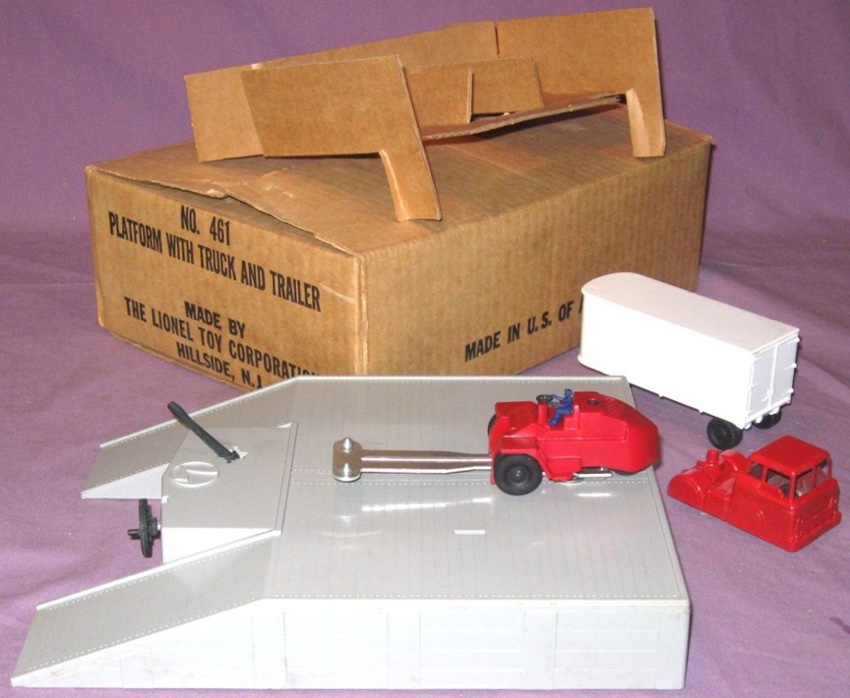 History
The 461 Platform with Truck and Trailer is a rare postwar accessory. This accessory is a low-cost version of the 460 Piggyback Platform -- which was last produced in the late 1950's. Unfortunately, Lionel train sales during the mid-1960's were poor and consequently, production of this accessory ended after just a single year.

As with many Lionel items from the 1960's, poor sales and low production numbers generally indicate a rare item in today's collector market. This is certainly true for the 461 as it is a scarce item to locate today. Additionally, it is an uncatalogued item as it was never included in any consumer catalogue! Although most parts are interchangeable between the 460 and 461 accessories, there are many differences. Therefore, trying to create a 461 accessory from 460 parts is impossible.

The Platform with Truck and Trailer is a fun set to play with -- but lacks much of the excitement usually accompanying Lionel's electrically operated accessories. When produced by Lionel in 1966 it was a low-budget accessory. Locating a complete and intact set will require some time as many of the original vans or trailer trucks are either completely missing or damaged. Finally, an original box and insert are almost impossible to locate.

Features
The 461 Platform with Truck and Trailer set has the following standard features: gray plastic base with a black sheet-metal base, red fork-lift tractor and two die-cast manually operated levers on the base. The blue man operating the tractor is frequently missing from this accessory. Also included with the accessory is a red painted, die-cast truck and one white plastic van.

Characteristics unique to the 461 accessory compared to the 460 include:

Only Known Variation - Shown in the photo above - All platforms were gray with a red die-cast truck and white plastic trailer.