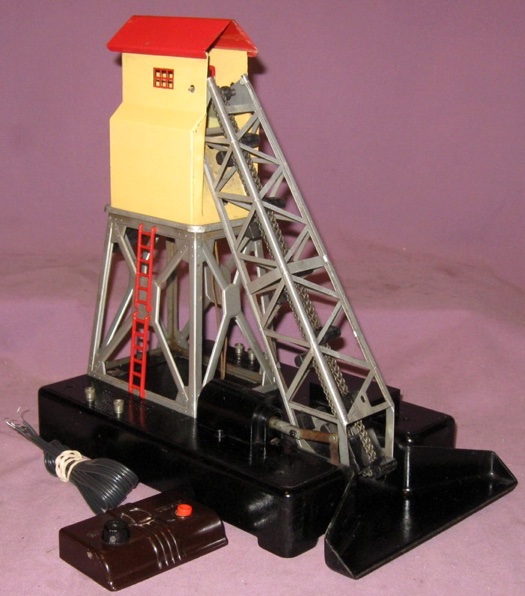 History
The 97 Coal Elevator was one of only several accessories to be produced in both the prewar and postwar era. The impressive size of the accessory as well as it's action, noise and excitement continues to make this an interesting and exciting accessory. Even people seeing this accessory for the first time are in awe with its operation.

As interesting as it is to watch, the 97 is not an efficient mover of coal. It will throw just as much coal onto your layout or train board as it does into a waiting freight car. Nevertheless, kids love to watch it as much as us adults!

The 97 Coal Elevator is designed to sit between two tracks -- approximately 15" apart from each other. Coal is dumped into the loading bin and carried up towards the yellow house. It is then released into the second track behind the coal elevator.

Features
The 97 Coal Elevator includes the following standard features: black bakelite base and tray, silver housing supports, yellow metal house and a red metal roof. There is also a chain with black buckets used to bring the coal from the dump tray to the yellow house.

Additional Detail, Photos & Box Information
The 97 Coal Elevator did not change in appearance during the postwar era.

Only Known Variation - Shown in the photo above - All 97 Coal Elevators have black bakelite bases, silver housing supports and a yellow house.