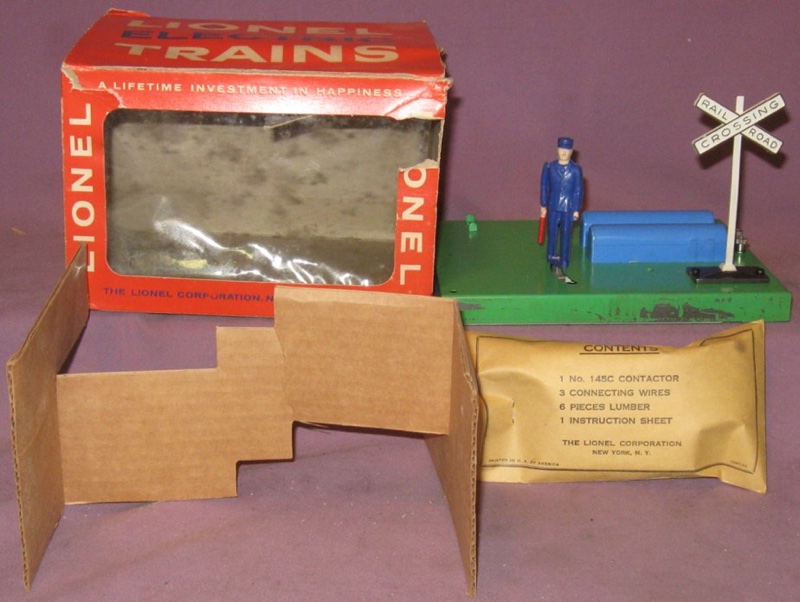 History
The 1047 Switchman with Flag is similar to the 45 and 145 Gateman, but did not include the popular shack, therefore, the figure always remains in sight. Without the shack, this accessory lacks some of the surprise associated with the gateman popping out of his shed.

Like many Lionel items produced in the late 1950's, the 1047 uses components from several other Lionel items. In the case of the Switchman, the blue fuel tanks are borrowed from the 3530 Generator Car, the six pieces of lumber are from the 264 Lumber Loader and the unmistakable green base and crossbuck sign are obviously borrowed from the 145 Gateman.

Although this accessory was catalogued for three years (1959 - 1961), experienced collectors believe this item was only produced for a single year: 1959. It appears excess inventory was catalogued and sold in 1960 and 1961.

The switchman is a difficult accessory to find complete and undamaged. Because the Switchman is always exposed and not protected by a shack, he is the most fragile component on the accessory. It is common to find the switchman's arm, flag or entire body missing.

Features
The 1047 Switchman with Flag has the following standard features: green sheet-metal base, blue fuel tanks, set of six pieces of lumber, plastic crossing sign with black die-cast base.

The figure always had a blue suit, painted face and hands and a red flag. Lionel always included a 145C track activator in order to operate this accessory.

Additional Detail, Photos & Box Information
Original boxes for the 1047 accessory are harder to locate compared to the actual accessory. The cellophane picture box was fragile and due to its size and shape, is generally found in poor condition. Nice boxes will command a premium.

Only Known Variation - Shown in the photo above - All Switchmen have a green sheet-metal base with a blue man and a white crossbuck sign.