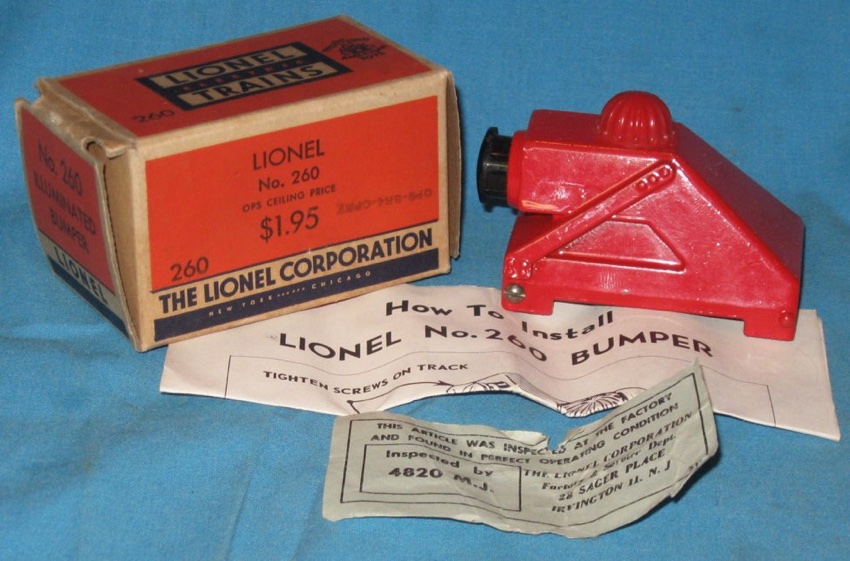 History
The 260 Illuminated Bumper is arguably the most common accessory ever produced by Lionel. Being a low cost item -- as well as being illuminated -- practically every layout had several bumpers. It was a common item to purchase as a gift or for Santa to leave under a Christmas tree.

Construction of the bumper remained virtually unchanged throughout its nineteen year career. There was a minor mold change to reduce the size of the rear support foot in the late 1950's to accommodate Super-O track. Then in 1968, the bumper changed from a die-cast red bumper to a plastic black bumper. The plastic black bumpers are hard to find.

One final point of interest is the original box for the 260 bumper. There are numerous variations, some of which are harder to locate than the bumper itself. The harder to find boxes include the Bold Classic and Orange Picture versions.

Features
The 260 Illuminated bumper is a painted red die-cast metal bumper with illumination plus a red jewel cap on the top. The black piece on the side is spring loaded and protects the bumper from runaway freight cars!

027 / O Gauge Red Die-cast Bumper - Shown in the photo above - The 027 / O Gauge version is the most common version.
Super O Red Die-cast Bumper - A common bumper, but not as frequently found as earlier 027 and O gauge version.
Black Plastic Bumper - A small production run in the late 1960's. Assumed to be produced in 1968 and 1969.
Black Plastic Bumper without Baseplate Data - The final production run for the 260 bumper (in mid to late 1969) did not include Lionel product data printed on the baseplate. This was Lionel's final step to save a few more cents on the production cost of its 260 bumper. It is assumed this variation was only producted for a few weeks and is the hardest variation to locate. 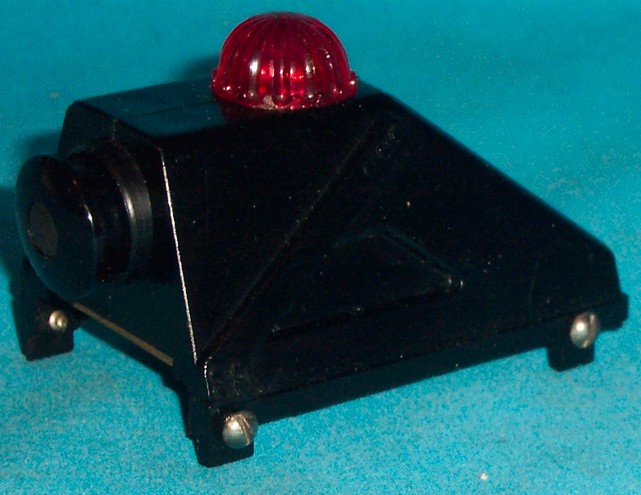