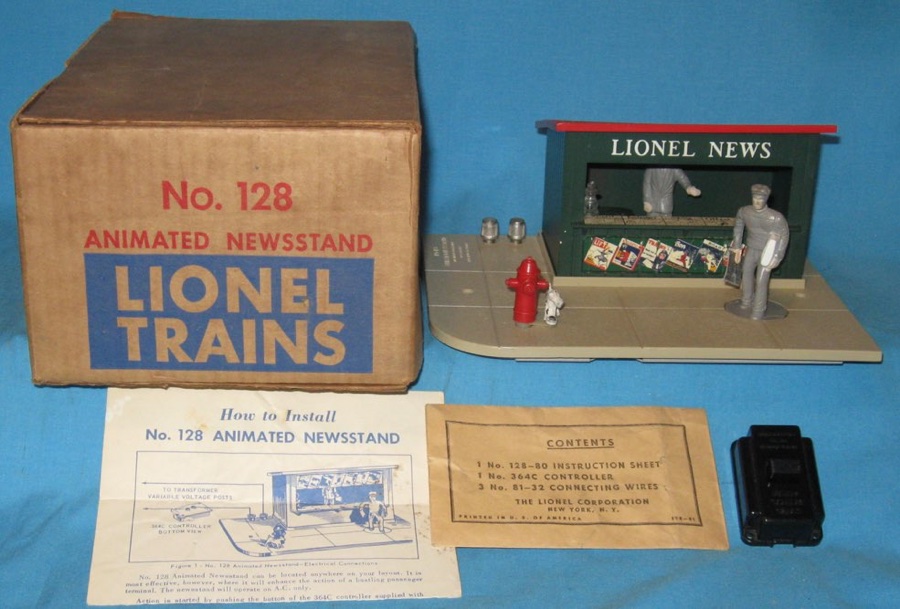 During the mid to late 1950s, Lionel's engineering team continued to develop ingenious accessories using the vibromotor. Up through 1956, vibromotor accessories only powered one component on an accessory - such as a beacon on the 494 Rotary Beacon tower. For 1957, Lionel introduced two noteworthy vibromotor items, each powering two items. The two new 1957 items were the 128 Animated Newsstand -- powering a newspaper boy and his dog, and the 3444 Erie Animated Gondola powering a police officer and hobo on a gondola.

Experienced collectors believe the 128 Animated Newsstand was only produced in 1957 yet remained in the catalogue until 1960. This is supported by the fact there is only one known instruction sheet (dated 10/57) and only one known box (also dated 10/57). Locating a complete, boxed newsstand will require some time as the insert and newspaper in the boys hand are frequently missing.

Features
The 128 Newsstand has the following standard features: green painted plastic structure, red roof, tan base, gray newspaper man inside the stand, gray newspaper boy outside of the stand plus a red hydrant with a white dog having black spots. The lantern on the newspaper stand is illuminated via a lamp located below the lantern. Additionally, the newspaper in the boys right hand is removable.

It's interesting to note, the spots on the dog were all hand-painated -- thus, no two dogs are alike. Beware when purchasing this accessory, the small newspaper is frequently missing.

This accessory is an on-off type accessory. It is controlled by Lionel's 364C controller.