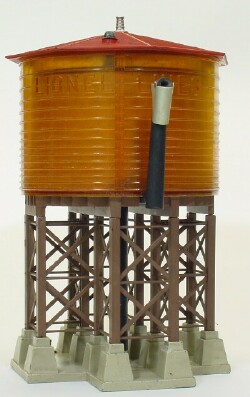 History
The 38 Pumping Water Tower is a superb model of a real-life water tower frequently seen in the United States in the 1940's. This tower was the first of three prototypical water towers produced by Lionel in the postwar era. It's size and detail are scale-like and many layout builders use this accessory near their freight yard.

The Pumping Water Tower contained an ingenious double-wall design along with a water reservoir designed to hold a small amount of real water. When the accessory was energized, a pump would transfer water from between the double walls to the reservoir -- thus creating the illusion of water being pumped into the tender of a steamer!

Features
The 38 Pumping Water Tower has the following standard features: gray die-cast base, brown or black plastic tank support trestles, amber-colored see-through tank and a plastic roof. The water spout is a two piece plastic item glued together with a metal shield attached to the end. Also included were a plastic funnel and six tablets (basically food-coloring tablets) used to change the color the water.

The interior of the water tower contained a small water reservoir (approximately 7 ounces in size) and a Lionel OO gauge motor (from the pre-war era) used to pump the water to the revervoir.

The roof was available in either gray, brown or red. However, there is some question as to the originality of a gray roof. Many believe the gray roof was not available on the # 38 and versions having a gray roof are simply a roof which was replaced from a # 30 water tower.

Additional Detail, Photos & Box Information
This accessory is rarely functional as there was a significant problem with two of the materials used to build the tower. The location where the black plastic tubing attaches to the styrene tank is the area with the problem. In almost every case, the styrene tank appears melted at the connection point with the black tubing. The problem is a chemical reaction of the black tubing and the styrene tank material. Locating a 38 Pumping Water Tower that is intact and all original is almost impossible.