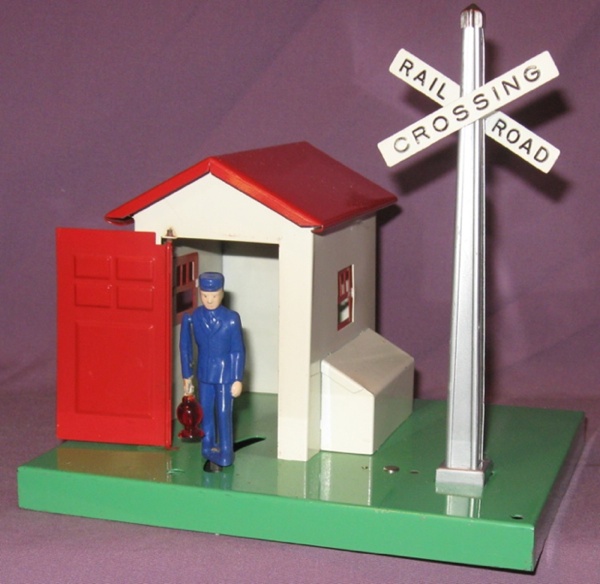 History
The postwar 45 Operating Gateman accessory is a carry-over item from Lionel's prewar era. Originally introduced in 1937 under the number 45N, this all-metal accessory has become a staple on many layouts. Beginning in 1950, the infamous 145 Operating Gateman was created, which is a slightly smaller and more scale-like gateman, but was based upon the postwar 45 gateman. In either appearance, the gateman has become one of Lionel most popular accessory. The 45 Gateman is a reliable accessory and is popular with both operators and collectors.

Originally listed in the 1945 catalogue as 45N, Lionel changed the accessory number in 1946 to simply 45. However, all original postwar boxes carried the '45N' number on the exterior. It is unknown as to whether a '45' box exists -- with the 'N'.

Features
The 45N and 45 Operating Gateman have the following standard features: green metal base with a red lamp mounted in the base, white metal house, red roof, metal sign post and a die-cast crossbuck. The figure was always blue with a red lantern and painted face and hands.

Lionel always included a 153C contactor with the accessory.

Additional Detail, Photos & Box Information
The only significant variation involves the green base. For 1949, the green base was painted the same color green as the 3656 cattle station.

Green Base, White Building, Red Roof - Only Known Variation - All postwar gatemen have a green base with a whiter cream-colored house and a red roof.