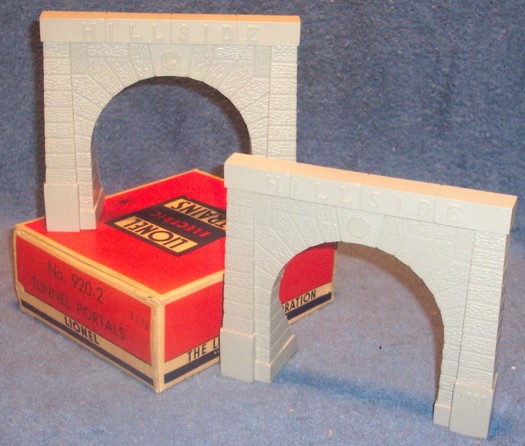 History
The 920-2 Tunnel Portals were originally issued as a component of the 920 Scenic Display set from 1957. However, for 1958 and 1959, the portals were packaged and sold separately from the Scenic Display set. The tunnel portals are somewhat hard to locate and their original bow is even rarer.

The tunnel portals are realistic and based upon a typical tunnel entrance frequently seen on any eastern United States railroad in the 1950's. Lionel's model also has the year 1957 molded in the lower right portion of the portal.

Features
The 920-2 Tunnel Portal has the following standard features: molded gray plastic portals, Hillside lettering across the top and the year 1957 stamped in the lower right portion of the portal.

The portals were always packed as a pair.

Only Known Variation - Shown in the photo above - All 920-2 tunnel portals are molded in gray with Hillside lettering and 1957 molded in the lower right portion.