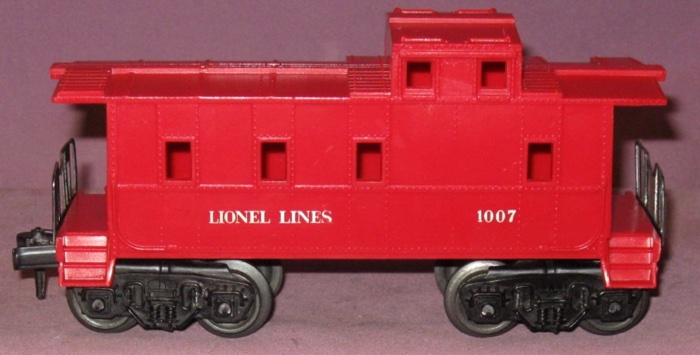 History
The 1007 was classified as a Scout caboose by Lionel and intended to be used only with Scout trains produced by Lionel. The difference between a Scout and non-Scout freight car is the coupler. Scout couplers are not compatible with the regular Lionel knuckle coupler. In the final analysis, this incompatibility caused the demise of the Scout line in the Lionel family.

Features
Standard features of the 1007 caboose are sparse and include a molded red body with white lettering, scout style side bolsters and a single scout coupler. The 1007 has generated little interest in today's marketplace.

Additional Detail, Photos & Box Information
There are two variations to the 1007. The first is a caboose with a small raised board on the catwalk near the front of the caboose. The second is a tuscan version. Each are rare items and actively sought after by collectors.

A final variation has to to with the coupler. Many 1007 cabooses are found with the standard Lionel knuckle coupler instead of the scout coupler. Based upon others research, these versions do not appear to be factory items. All appear to be left over inventory re-fitted with knuckle couplers. Many pristine examples have come from Madison Hardware or service stations of the 1950's simply trying to move old inventory.

Red, Regular Catwalk - The most common version of the 1007.
Red, Raised Catwalk - A very difficult variation to find.
Tuscan Mold - The most difficult version to locate.
Red, Knuckle Coupler - Listed here for reference purposes. Does not appear to be a Lionel item but rather a post-factory item. In most cases an item from Madison Hardware or a service station of the 1950's.

Below is a photo of the two different length boxes available for the 1007 caboose: 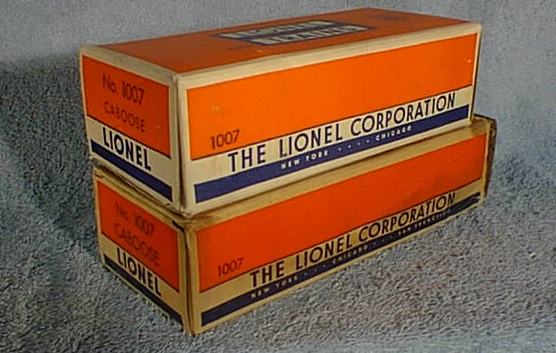