History
The 6167 caboose was introduced in 1963 and available in two different roadnames. The common version is a red Lionel Lines caboose while the uncommon is a yellow Union Pacific caboose. Surpisingly, the Union Pacific version had a longer life in the Lionel family than did the red 6167, however, the Union Pacific is harder to locate.

The red 6167 was introduced in 1963 and only lasted until 1964. It was classified as an entry level caboose and was included in many catalogued and uncatalogued sets during its brief life.

Features
The red 6167 had minimal detail and only included the following features: red unpainted body with white lettering, AAR trucks with one or two couplers and no end-railings. There is a red painted version, but it is scarce and very difficult to locate.

The yellow 6167 Union Pacific caboose was also introduced in 1963 with the same features as listed above with the main difference being this was a molded yellow caboose with blue lettering. As mentioned earlier, there have been many truck and coupler combinations reported on this caboose. Interestingly, the later version without end-railings is frequently found with one operating couplers on an AAR truck and one non-operating coupler on an Arch-Bar truck!

Unpainted Red - Shown in the photo above - The most common version produced in 1963 and 1964. There is practically no collector interest in this caboose.
Painted Red - The exact production date unknown, but assumed to be the first production run. This is a rare caboose to locate.
Union Pacific - An uncatalogued item manufactured from the early to late 1960's with its official stock number being 6167-85. This is a hard caboose to locate in collector condition. 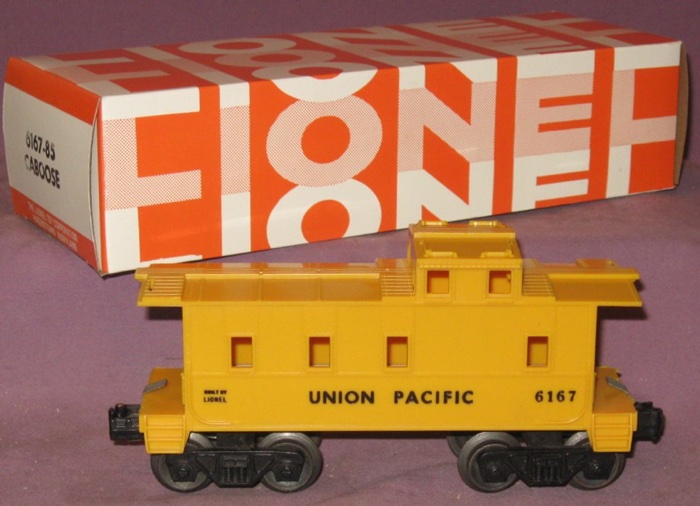 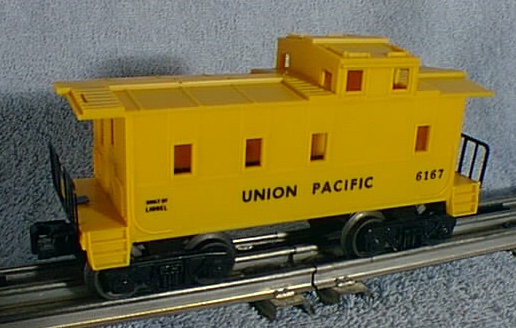