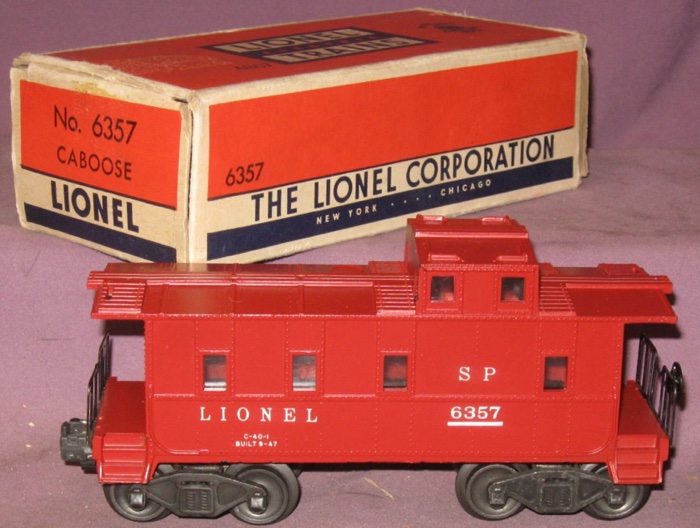 History
The 6357 caboose has the distinction of having the longest lifespan of any Lionel caboose in the postwar era. It was introduced in 1948 and ultimately retired in 1961. Its 14-year life started in Lionel's heyday of the late 1940's and is one of the few products to span all three decades of postwar train production. Because of its lengthy run, the 6357 has experienced almost every variation known to the SP-type caboose family. A single web page could not begin to describe all of the variations. For simplicity, the common variations will be documented on this site with a few rare ones mentioned for reference purposes.

The 6357 is a common caboose. During its 14-year reign in the Lionel family, it was included in numerous sets as well as being available for separate sale. Finding a 6357 caboose is easy; trying to acquire every variation will take time.

Features
The 6357 was introduced in 1948 as a middle-of-the-line caboose. It was introduced with some detail, but not as much as the top-of-the-line 6457 caboose. Standard features included: illumination, end-railings, a single brakewheel and one operating coupler.

Due to the elimination of the 6457 caboose in 1952, the 6357 became the top-of-the-line SP-type caboose offered by Lionel. With its new status, a smokestack was added to the 6357 for the remainder of its life.

Additional Detail, Photos & Box Information
Most of the current Lionel reference books categorize the SP-type cabooses by the lettering style on the side of the caboose. We've elected to remain consistent with that approach.

In addition to the various lettering styles, there are numerous color shades or variations within each entry. The colors run the entire range from red to maroon. In some cases the color difference is so slight you need to place two cabooses next to each other in order to determine if a difference exists.

The length of this caboose is approximately 7" long (coupler to end). None of the variations listed below are considered hard to find. 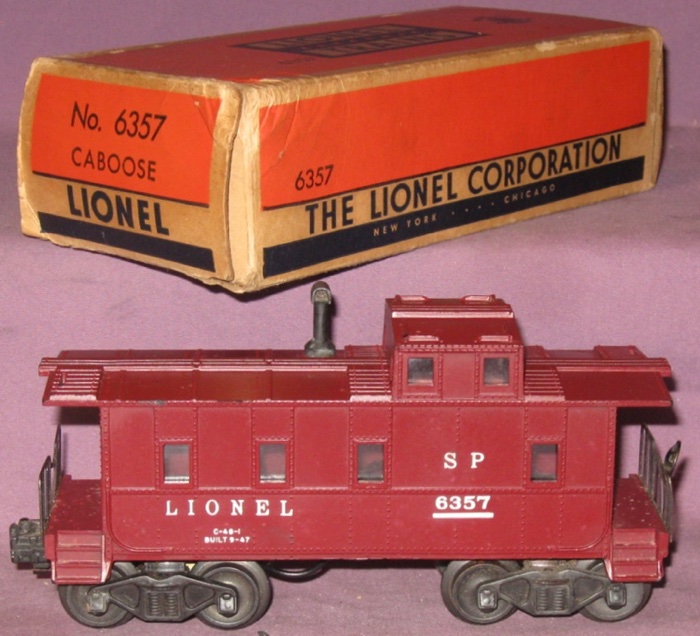 Lionel - Estimated to run from 1957 through 1961. This is probably the most common version. It has a painted body, white lettering, Lionel logo, either a tall die-cast or short plastic smokestack, illumination, single brakewheel and a single operating coupler. Lionel introduced this variation with bar-end trucks and switched to AAR trucks in 1959. 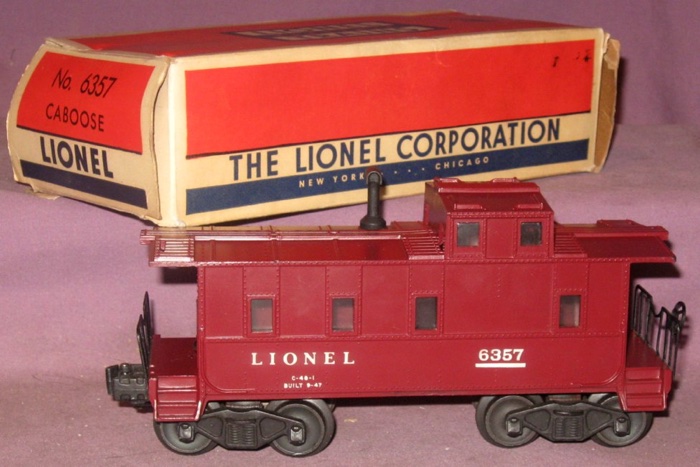