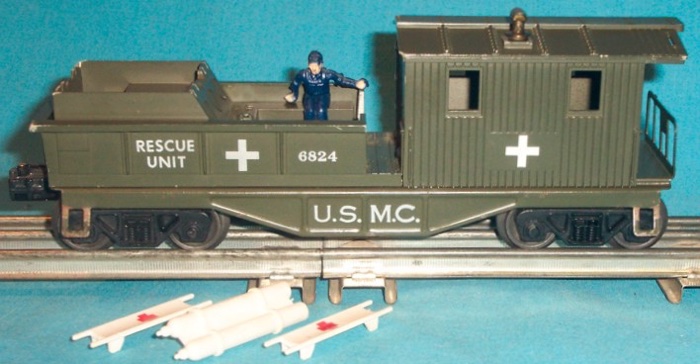 History
The 6824 United States Marine Core Rescue Unit Work Caboose is frequently referred to as the First-Aid Medical Caboose. This was another item in a series of olive- painted military trains produced by Lionel in the early 1960's.

The 6824 was produced with several 'extras' such as two stretchers, an oxygen tank, a figure and control panel. These components are frequently lost or damaged and locating this caboose with original and unbroken components is difficult.

Additional components included with this caboose include: two white stretchers with the red cross symbol on each stretcher, oxygen tanks, a blue rubberized figure and control panel. As mentioned earlier, these items are usually lost or broken.

This caboose was only available in a Lionel set and not available as a separate sale item.

Additional Detail, Photos & Box Information
A very common problem with all 6824 cabooses is with the footsteps. Quite frequently the corner footsteps are either broken off or the paint has flaked off of the frame. Locating a 6814 caboose with intact steps and paint is difficult.

Only Known Variation - Shown in the photo above - All 6824's are painted olive and include two strecthers and oxygen tanks.