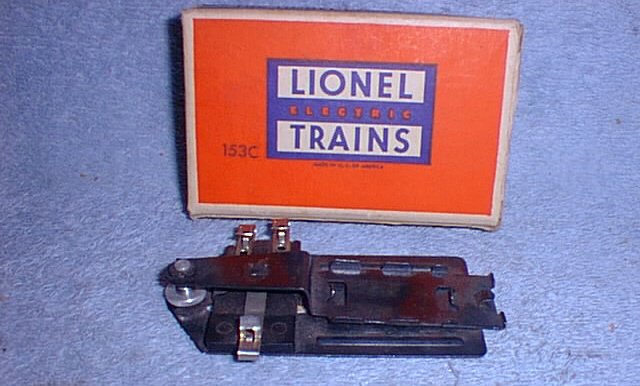 History
The 153C Contactor was originally built for the 153 Block Signal. It is a single-pole, double-throw track activator controlled by the weight of a passing train. The 153C track activator was introduced in 1946 and subsequently included with many Lionel accessories throughout the postwar era.

When Lionel included the contactor with an accessory, it did not come in its own individual box but rather a packing envelope. It was not until the early 1950s when Lionel began to sell the 153C as its own separate sale item, therefore requiring its own box. Although an exact year is not known for the introduction of the component box, most Lionel historians believe it was introduced sometime between 1950 and 1952.

Additional Detail, Photos & Box Information
As with many of the smaller individually packaged items sold by Lionel, locating the original box is usually more difficult than locating the item. The actual 153C contactor is extremely easy to locate while its original box is hard to find -- especially the one-year-only OPS version from 1952.

Only Known Variation - Shown in the photo above - 153C Contactors are made of stamped sheet metal with three wire clips.