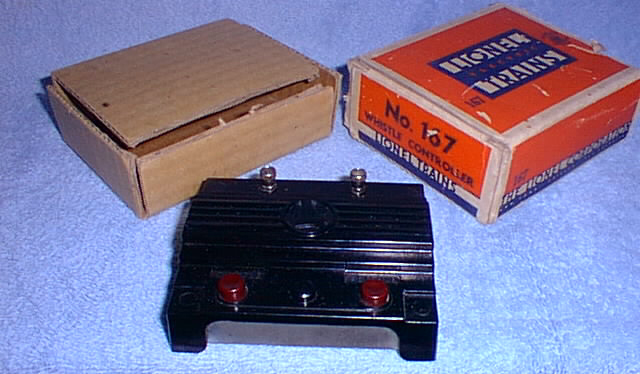 History
The 167 Whistle Controller was introduced in 1940 -- Lionel's prewar era. It was introduced because Lionel had recently invented the whistle for their whistling tender. Unfortunately, none of their transformers at that time had been upgraded to include a whistle button. Therefore, this controller permitted Lionel to inexpensively -- and more importantly quickly -- include a whistling tender in many of their sets.

The 167 was reintroduced after the war in 1946 for similar reasons -- most of the transformers included with introductory sets had not yet been upgraded to include a whistle control button. Once again, an inexpensive and quick solution was to include a 167 whistle controller with the sets.

Features
Standard features of the 167 Whistle Controller include: black bakelite case with two buttons, steel base and two wire terminals.

The two push-buttons on top of the controller were available in several colors. Red is the common color, but both maroon and black buttons have been documented. Both the maroon and black button versions are assumed to have been produced prior to 1950. Additionally, the steel base can be found as either an unpainted silver base or a chemically blackened base. Neither the color of the buttons nor the type of base has an impact on the value.

Additional Detail, Photos & Box Information
As with many of the smaller individually packaged items sold by Lionel, locating the original box is usually more difficult than locating the item. The 167 box and insert is one of the easier boxes to locate although many are in less than collectable condition. Clean and sturdy examples of the 167 box and insert are becoming harder to find.

Only Known Variation - Shown in the photo above - All 167 Whistling Controllers have black bakelite covers.