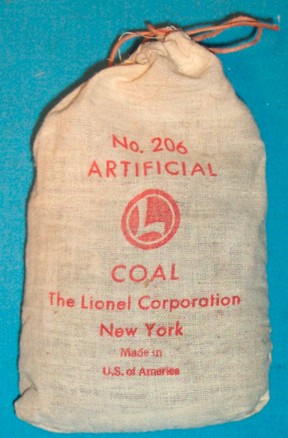 History
The 206 Artificial Coal was originally issued during the prewar era for the many coal related accessories produced by Lionel. Therefore, as Lionel began postwar train production, it was only natural to continue producing the 206 Artifical Coal. As the name implies, the artificial coal is truly that -- artificial! The coal is nothing more than excess Bakelite material used by Lionel, crushed up into small pieces.

The 206 coal contained approximately a half-pound of simulated coal. It was listed as a separate sale item and intended to be used as an add-on to the many coal related accessories and freight cars. This differed from the 207 Artificial Coal which contained only a quarter-pound of simulated coal and was included by Lionel with coal-related freight cars and accessories. The 207 bag of coal was not sold separately.

Features
Standard features of the 206 Artificial coal include: white or cream colored cloth bag with red or reddish-orange lettering and a reddish-orange drawstring. When full, the 206 contained about one half pound of coal.

Additional Detail, Photos & Box Information
As with many of the smaller individually packaged items sold by Lionel, locating the original container is usually more difficult than locating the item. The 206 bag of coal is somewhat hard to find, while the coal is easy to locate.

The 206 Artificial Coal enjoyed a lengthy 15-year production run. During this time there was only one significant variation to the bag, which involved the lettering. It is commonly believed the earlier bags have the word 'Corporation' abbreviated to Corp. while later bags have 'Corporation' spelt out. Most collectors believe the earlier version with Corp. is harder to locate. Unfortunately, exact production years are not known and the change-over is assumed to be in the late 1940's.

The Lionel Corp. - The abbreviated Corp. is harder to locate and assumed to be early postwar production, possibly only a few years and ending by the late 1940's.
The Lionel Corporation - Shown in the photo above - The more common version. Assumed to have been produced from the late 1940's until 1959.