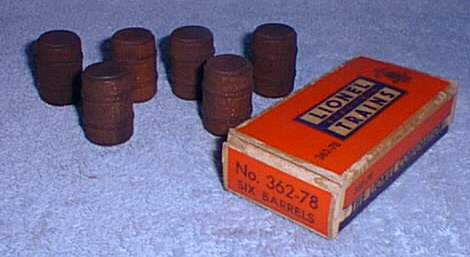 History
The individual box of barrels was first offered with the introduction of the 362 Barrel Loader in 1952. Additionally, when the 3562 Operating Barrel car was introduced in 1954, a set of boxed barrels was included with each operating car.

Lionel always included six barrels in each box. As with many of the replacement parts offered by Lionel, the barrels are somewhat common -- but a complete and intact box is much harder to locate.

Features
Standard features of the 362-78 Set of Barrels include: six dark-stained wooden barrels.

In early 1954, Lionel released a very small production run of red barrels -- all being extremely rare.

Additional Detail, Photos & Box Information
There are two variations to the numbering on the box.