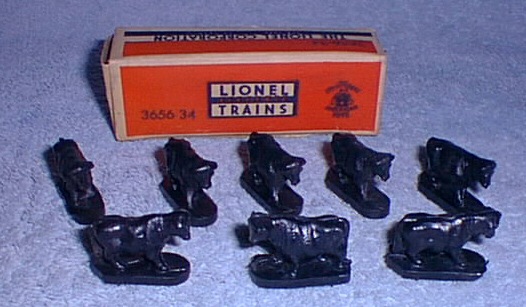 History
The individually boxed set of cattle was first seen with the 1949 introduction of the infamous 3656 Cattle Station. However, it was not until 1952 that the actual box of cattle became available as a separate sale item from Lionel. Lionel always included nine cows in the box. As with many of the replacement parts offered by Lionel, the cows are common -- a complete and intact box is difficult to locate.

Features
Standard features of the 3656-34 Set of Cattle include: nine black rubber cows.

Additional Detail, Photos & Box Information
There are four variations to the numbering on the box.