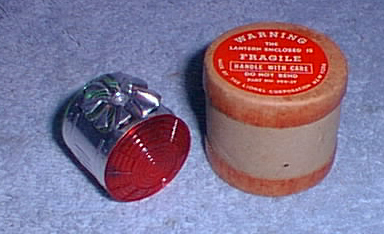 History
The 394-37 Replacement Beacon Top was available for 12 years. Although it did have a lengthy production run, it remains a somewhat hard item to find in collector condition.

A 394-37 container was provided with each 394 Rotary Beacon Tower. Additionally, it was offered as a replacement part by Lionel from 1954 through 1960. The 394-37's round container is one of only a handful of items supplied by Lionel in a round box -- not the typical orange and blue classic Lionel box of the 1950s.

The common container produced by Lionel is a round cardboard cylinder containing a red paper label with white letters. This container was available from 1949 through the late 1950s. Sometime in the late 1950s -- probably as late as 1959 -- the round container changed to a plain rectangular cardboard box. These rectangular boxes lack external markings -- making fakes difficult to distinguish from originals.

Round Cardboard Container - Shown in the photo above - Most 394-37 boxes are round with a red paper label.
Brown Cardboard Box - The final box for the 394-37. Assumed to have been produced for only a single year -- possibly two. These boxes are difficult to locate.