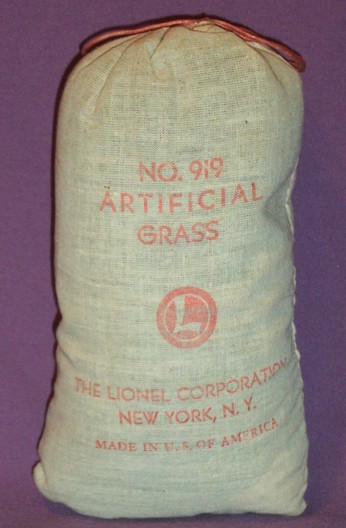 History
During the early postwar era, Lionel offered a limited number of scenery related products to it's customers for their layouts. The artifical grass was a prewar carryover item and was simply colored sawdust packaged in a Lionel cloth bag.

The collectable part of the 919 artifical grass is solely in the cloth bag.

Thus far, three variations to the cloth bag have been documented. The only changes involve the color and font-style of the lettering.

Black Ink, Serif Lettering - Presumed to be leftover prewar inventory sold during the early postwar era, probably in 1945 and 1946.
Red Ink, Serif Lettering - This variation appears to be a transition style between the first and final variation. Collectors assume this variation was only produced for a brief time during 1946. This version is rare.
Red Ink, Block Lettering - Shown in the photo above - This is the final and most common variation. It is assumed to have been produced from 1947 until the end in 1964.