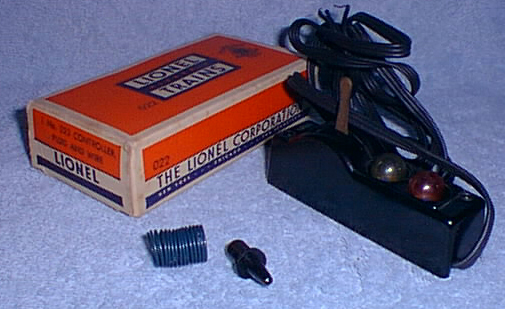 The 022 individual boxes were also sold as a separate sale item. In these cases, Lionel used the exact same boxes and internal components when compared to those included with a switches. As with many of the replacement parts, the internal components are easier to obtain than the actual component box.

Features
Standard features of the 022 Switch Controller include: a single switch controller with approximately three feet of wire, switch plug and wire.

When packaged as a pair of controllers, two of each of the above items were included in the box. Boxes for a pair of 022 Switch Controllers were always included with a set of switches and never sold as a separate sale item.

Additional Detail, Photos & Box Information
The 022 Switch Controller box is one of the easier component boxes to locate. However, there were several changes to the box style during the 23-year production cycle. Trying to collect each variation will be difficult -- and in some cases expensive -- as a few specific variations are rare.

Only Known Variation - Shown in the photo above - All 022 Remote Control Switch Controllers are identical.