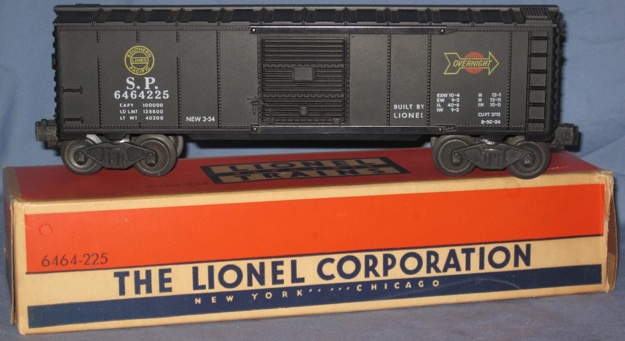 History
The 6464-225 Southern Pacific box car was introduced in Lionels second year of 6464 boxcar style production -- 1954. The theme of the 6464 series boxcars was to market a realistic and almost scale-like box car rarely seen in mass produced toy trains. The 6464-style box cars were an immediate success and remained in the Lionel catalogue up until it's final year of postwar production, 1969. Even today, all 6464-style box cars remain a favorite of collectors and operators.

The 6464-225 Southern Pacific is a moderately common car. It was included in sets as well as being available for separate sale. Its realistic, yet rather dull, black paint scheme did not attract many buyers to it in the mid-1950s and accounts for the lack of widespread availability in todays marketplace. Clean quality cars are hard to find.

Additional Detail, Photos & Box Information
The common version of the 6464-25 box car is painted a flat black. There is a harder to find version which is painted glossy black.

Flat Black - Shown in the photo above - The common version.
Glossy Black - A hard to find variation.