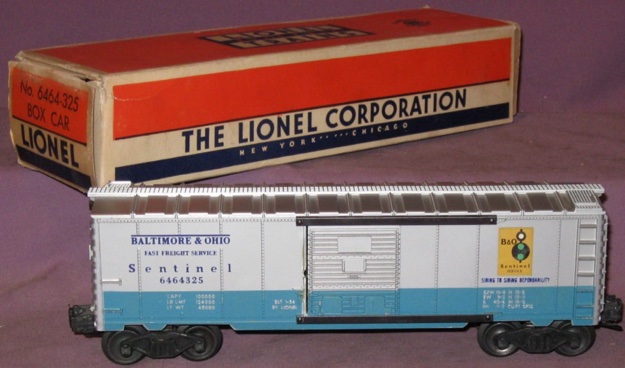 History
The 6464-325 Baltimore & Ohio / Sentinel box car was produced for only a single year -- 1956. Production of these box cars allowed Lionel to market a realistic and almost scale-like box car never previously seen in the Lionel family. The 6464-style box cars were an immediate success and remained in the Lionel catalogue up until their final year of postwar production, 1969. Even today, all 6464-style box cars remain a favorite of collectors and operators.

The 6464-325 is a rare box car. Collectors commonly referred to as this box car as the Sentenial -- while referring to the 6464-400 as the Baltimore & Ohio box car. The Sentenial was never offered in a Lionel set and only available as a separate sale item. Surprisingly, its colorful and splashy exterior graphics never caught the eye of the public and was not a strong selling item in 1956. Therefore, locating a collectable example of this box car -- especially with the original box -- will be a time consuming and expensive search.

Features
The 6464-325 box car included the following standard features: silver painted upper body with an aqua color painted lower band, navy-blue lettering on the silver portion and white lettering on the aqua portion, painted sliding doors to match the side colors, B & O / Sentenial decal on the right, bar-end trucks with operating couplers plus a single brakewheel.

Only Known Variation - Shown in the photo above - All Baltimore & Ohio / Sentenial box cars are painted silver and aqua.