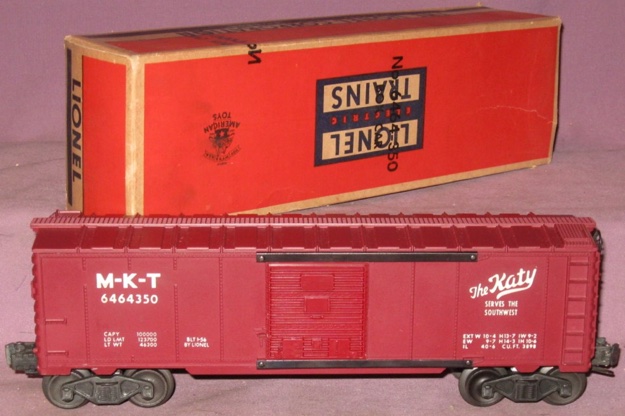 History
The 6464-350 MKT (Missouri-Kansas-Texas) box car was produced for only a single year -- 1956. Production of these box cars allowed Lionel to market a realistic and almost scale-like box car never previously seen in the Lionel family. The 6464-style box cars were an immediate success and remained in the Lionel catalogue up until their final year of postwar production, 1969. Even today, all 6464-style box cars remain a favorite of collectors and operators.

The 6464-350 is a rare box car. It was never offered in a Lionel set and was only available as a separate sale item. Additionally, with its rather plain -- although realistic -- exterior graphics, it was not a strong selling freight car. Locating a collectable example -- especially with the original box -- will be a time consuming and expensive search.

Only Known Variation - Shown in the photo above - All MKT box cars are painted tuscan with unpainted doors. The above photo also includes the side-stamped box which is missing all stampings on each end flap.