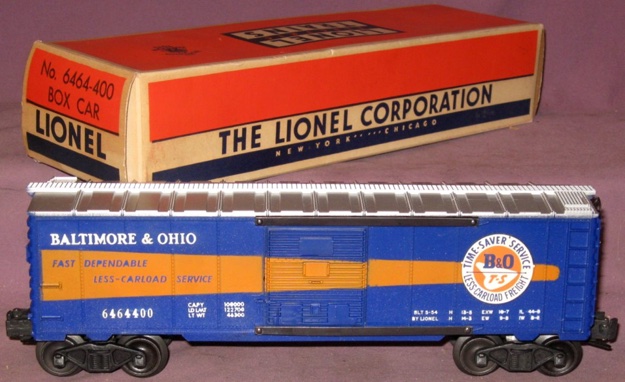 History
The 6464-400 Baltimore & Ohio box car was one of only a select few 6464-style box cars having two independant production runs. The excellent graphics and strikingly realistic colors on this car continue to make it a favorite of collectors and operators.

The 6464-400 Baltimore & Ohio box car is not an easy car to acquire in collector condition. The silver roof and painted orange side stripe have not held up in good condition -- even with less than average usage.

Features
The 6464-400 box car included the following standard features: blue shell with an orange painted stripe on the side and silver painted roof, white lettering, multi-block sliding doors plus a single brakewheel.

An interesting piece of history on the B & O box car are its trucks. For the first production run, Lionel used their typical bar-end trucks of the era. When the box car was re-issued in 1969, Lionel did not use the common AAR truck from the 1960's, but rather used left-over inventory of bar-end trucks to complete the car!

Additional Detail, Photos & Box Information
The blue shell on a -400 box car is known to come in varing shades of blue. In most cases you have to hold several shells next to each other to determine if a variation actually exists. There is no difference in value to the varing shades of blue.

Only Known Variation - All box cars were blue with a silver top and included bar-end trucks. The 1969 version has the late 1960's version box. 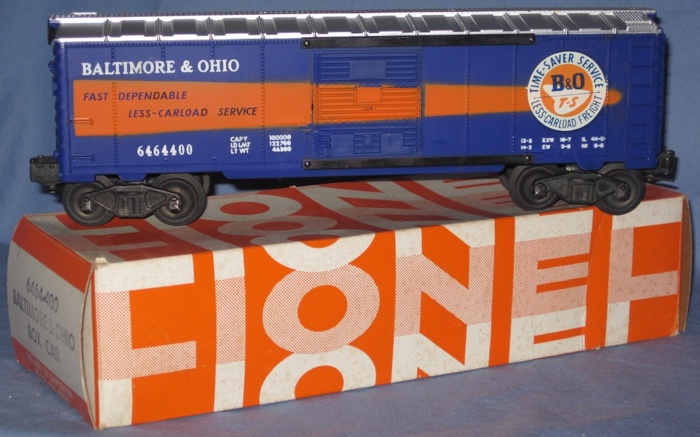