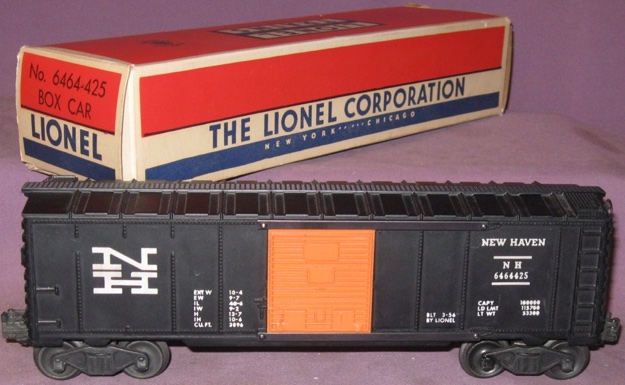 History
The 6464-425 New Haven box car was the eighteenth 6464 series box car offered by Lionel. Production of these box cars allowed Lionel to market a realistic and almost scale-like box car never previously seen in the Lionel family. The 6464-style box cars were an immediate success and remained in the Lionel catalogue up until their final year of postwar production, 1969. Even today, all 6464-style box cars remain a favorite of collectors and operators.

The 6464-425 was included in several sets as well as being available for separate sale. Its plain black exterior with white lettering and bright orange door makes this a plain, yet somewhat attractive box car.

For 1956 and part of 1957, bar-end trucks were standard. However, beginning sometime in 1957, the trucks switched to the AAR style.

Additional Detail, Photos & Box Information
The authors of this web site believed the half-serif N version -- meaning the shape of the top right portion of the letter N located to the left of the door -- is assumed to have been produced prior to the full-serif version. The half-serif version usually contains bar-end trucks while the full serif version can be found with either bar-end or AAR trucks. 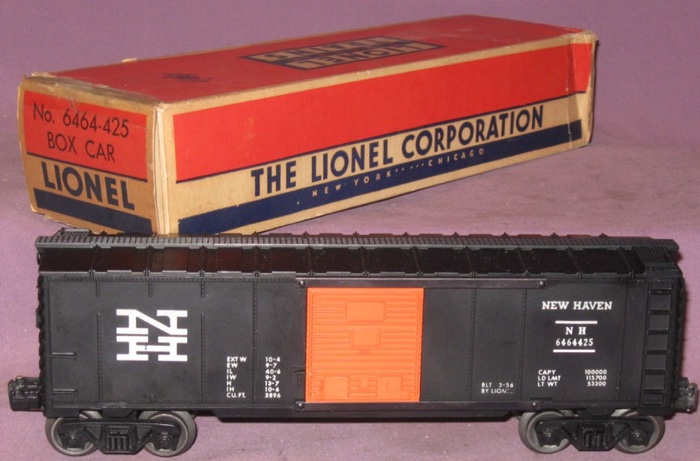