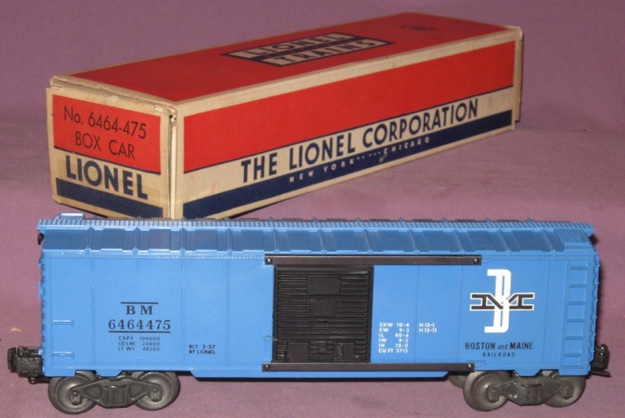 Features
The 6464-475 box car included the following standard features: blue molded shell with white and black lettering, unpainted black multi-block sliding doors plus a single brakewheel. For the first year of production -- 1957 -- bar-end trucks with operating couplers were the norm. Beginning in 1958 -- and continuing throughout the remainder of production -- AAR trucks with two operating couplers were standard.

Additional Detail, Photos & Box Information
The Boston & Maine box car has several minor variations, some of which are difficult to locate. They include:

Color or Shade of Blue - Most shells are unpainted blue. Within these molded colors, variations do exist ranging from light to medium to dark blue. Dark blue versions are extremely difficult to find.

Mold Color - Most shells are molded blue. However, later in the production run painted blue versions are known to exist. These painted versions are difficult to find.
Lettering / Date - The majority of the B & M box cars have the lettering 'BLT 2-57 / By Lionel' to the left of the door. At some point during its second production run in the late 1960s the date was removed and it simply appeared as 'BLT / By Lionel'. Verisons without the 2/57 date are harder to locate. 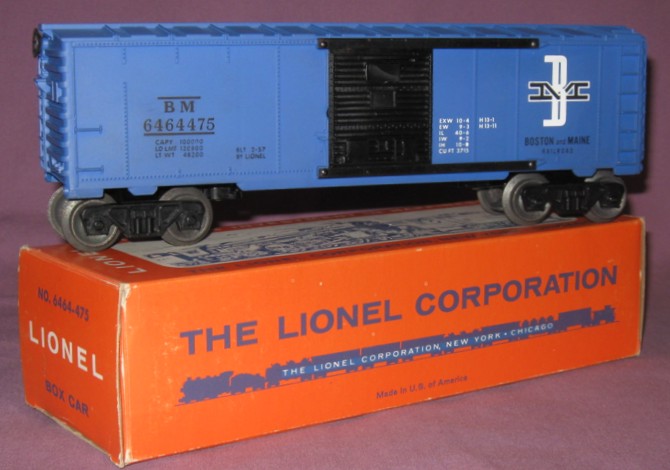