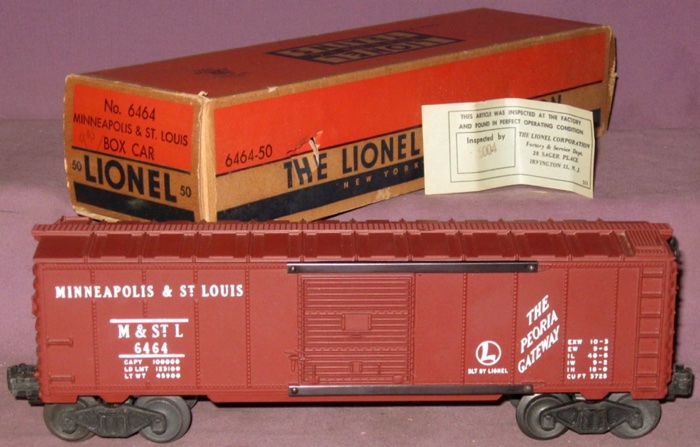 History
The 6464-50 Minneapolis & St. Louis box car was part of the first offerings of the infamous 6464-style box cars. In total, four 6464-style cars were created by Lionel in their introductory year, 1953. Production of these box cars allowed Lionel to market a realistic and almost scale-like box car never previously seen in the Lionel family. The 6464-style box cars were an immediate success and remained in the Lionel catalogue up until their final year of postwar production, 1969. Even today, all 6464-style box cars remain a favorite of collectors and operators.

The 6464-50 is a common car. It was included in several sets as well as being available for separate sale. Since this is an easy-to-locate boxcar -- along with having rather plain -- yet realistic -- M. & St. L railroad markings -- this box car has generate minimal interest with collectors.

Glossy Tuscan Shell - A hard-to-find version is the glossy painted 6464-50 box car.
Flat Tuscan Shell - Shown in the photo above - The most common version of all 6464-50s are painted a flat tuscan color.