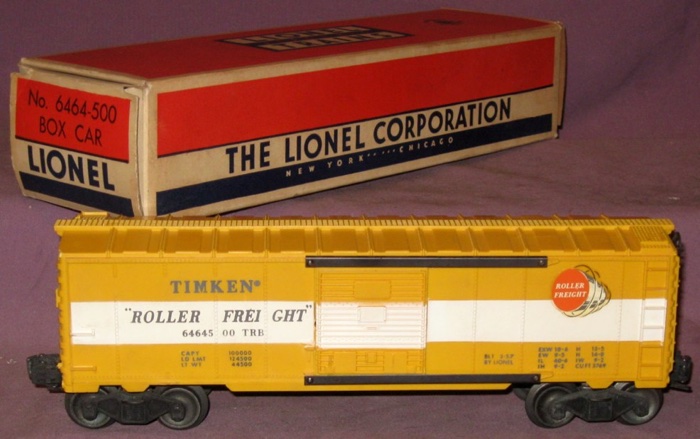 History
The 6464-500 Timken box car was one of only a select few 6464-style box cars having two independent production runs. The excellent graphics with a bright yellow exterior plus realistic markings on this car continue to make it a favorite of collectors and operators.

The 6464-500 Timken box car is not an easy car to acquire. Collector quality examples are hard to find as the yellow and white are prone to attracting dirt and smudges from handling. Clean cars with nice graphics remain in demand.

Most collector guides indicate the second production run was only for a single year: 1969. However, there are some 1968 Hagerstown boxes for the Timken, indicating the box car was produced in both 1968 & 1969. The Hagerstown box is a difficult box to locate.

Features
The 6464-500 box car included the following standard features: yellow shell with a white stripe painted horizontally on each side, charcoal gray lettering, multi-block sliding doors plus a single brakewheel.

Additional Detail, Photos & Box Information
For the serious collector, there are several body mold variations on the 6464-500, some of which will command a significnt premium. However, externally the graphics and lettering remainded the same on all versions. Additionally, the one-year-only Hagerstown box is hard to locate.

Bar-End Trucks - Shown in the photo above - The common version.
AAR Trucks - A very hard version to locate, assumed to be 1959 production. 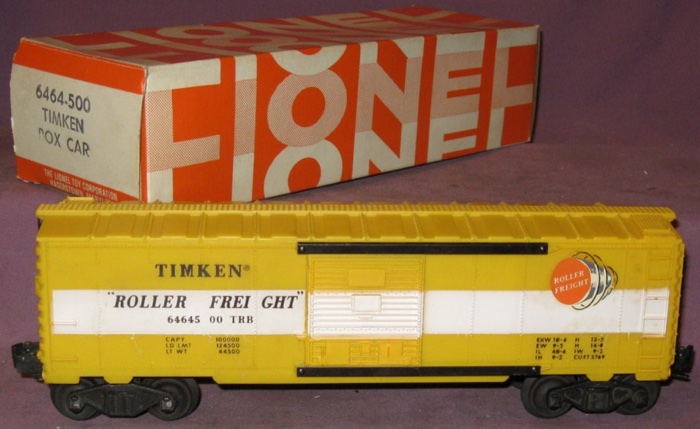