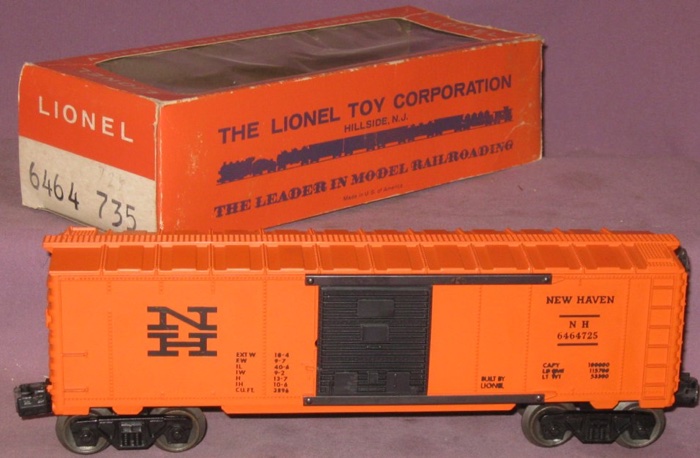 History
The 6464-725 New Haven box car is one of the more readily available 6464 series box car offered by Lionel. Production of these box cars allowed Lionel to market a realistic and almost scale-like box car never previously seen in the Lionel family. The 6464-style box cars were an immediate success and remained in the Lionel catalogue up until their final year of postwar production, 1969. Even today, all 6464-style box cars remain a favorite of collectors and operators.

The 6464-725 -- as well as the 6464-475 Boston & Maine -- had the longest production run of any 6464 series box car -- each being manufactured for eight years. Additionally, the 6464-725 carries the opposite color combination of its sister car, the 6464-425 New Haven. The lack-luster orange exterior of the -725 with black lettering and doors makes this a plain-looking car with minimal collector interest.

Orange Body, Black Doors - Shown in the photo above - The common version, produced from 1962 until 1968.
Black Body, Orange Doors - This is a rare car and only produced in 1969. It always came with bar-end trucks.