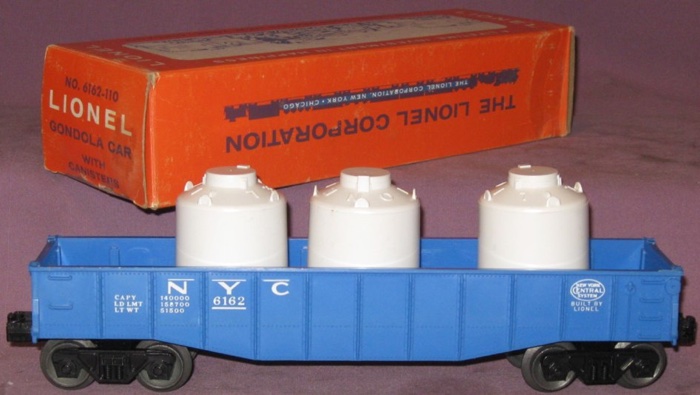 The 6162 was available in many sets as well as being sold as a separate sale item. When included as part of a set, most 6162s were packed without an original box. Locating a 6162 with its original box is -- especially with a box in collector condition -- is difficult.

Features
Standard features on both 6162 NYC gondolas include: unpainted body, AAR trucks plus three cannisters as its load.

The NYC version featured: unpainted blue body with white lettering, three white cannisters, the 'N' in 'NYC' was always in the third panel, the number 6162 was underlined and it usually has three lines of technical data. For the first few years of production, the NYC included two operating couplers. As production continued throughout the 1960's, the gondola gradually changed to include combinations of operating and non-operating couplers.

Additional Detail, Photos & Box Information
Most 6162 NYC gondolas have unpainted blue bodies -- with various shades of blue being available throughout the ten-year production cycle. For a brief period in the mid-1960s, the gondola was produced with an unpainted red body.

NYC Blue Gondola - Shown in the photo above - The common unpainted blue version.

Alaska Gondola - A hard-to-find version as it was only manufactured for a single year -- 1959.

NYC Red Gondola - An extremely rare variation, production is assumed to be only for a portion of 1966. 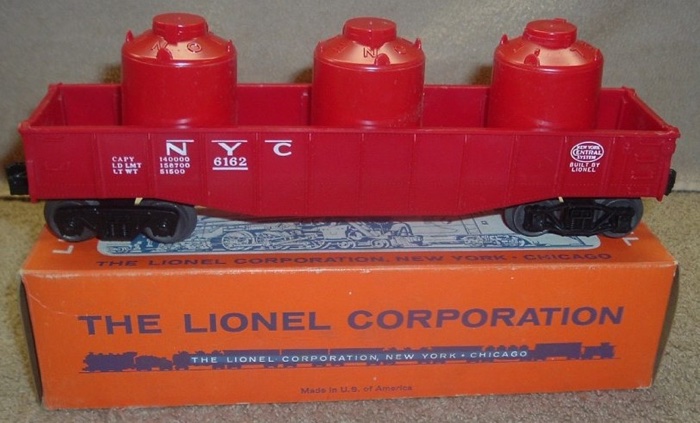