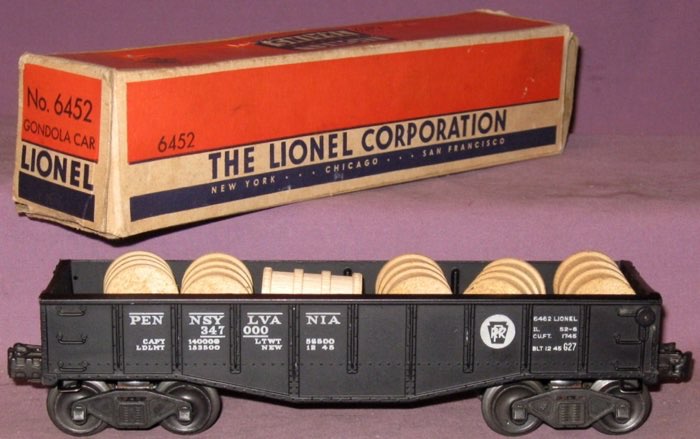 History
The 6452 Pennsylvania gondola is a continuation of the 2452 Pennsylvania gondola. The only change being the 6452 contained the new-for-1948 magnetic couplers which replaced the coil couplers on most pre-1948 freight cars. As with many transition items, original 6452's from early 1948 are known to have staple-end trucks.

It is interesting to note the 6452 is a fairly hard gondola to locate. It was included in only one set during its two year run (set # 1423W) and was not a popular separate sale item. Locating a nice and clean 6452 is difficult.

Features
Standard features of the 6452 include: black painted body with white lettering and a Pennsylvania Railroad logo, metal frame, metal footsteps at all four corners and two metal brakewheels.

Incorrect '6462' on Side - Shown in the photo above - The first year of production had an incorrect number printed on the side. This is harder to find compared to the 1949 version.
Incorrect '6452' on Side - For 1949, the number on the side was correct to be 6452. This is the more common version.