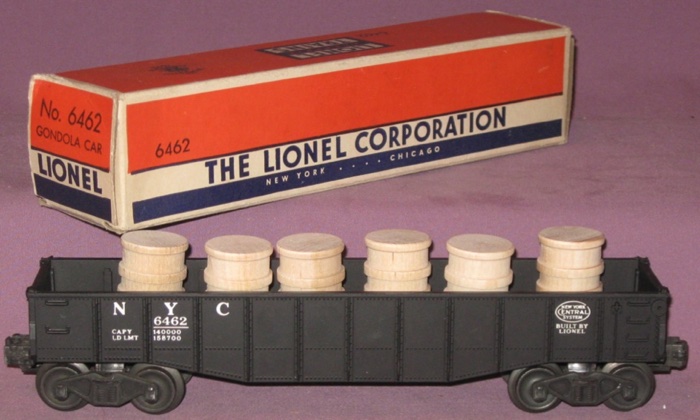 History
The 6462 New York Central gondola has the distinction of being the first long gondola introduced by Lionel in the postwar era. This gondola was Lionel's answer to providing its customers with a longer and more realistic gondola than previous offerings (for example the 2452 gondola). The 6462 experienced many common manufacturing changes during its long 10-year run. For that reason, we'll highlight the common variations along with some of the more difficult ones to locate. Not all variations are listed on this web page.

Features
The 6462 was introduced in 1949 as a top-of-the-line gondola with a great deal of detail in the body. Standard features included: painted body with white lettering, staple-end trucks with operating couplers, brakewheel, footsteps at all four corners and a set of six large unstained barrels.

The 6462 is a common gondola as it was available in numerous sets as well as being available for separate sale. Finding a 6462 gondola is easy, acquiring every variation will take time.

Additional Detail, Photos & Box Information
Most Lionel reference books catagorize the 6462 NYC gondola based upon the color of the gondola. We've elected to remain consistent with that approach.

In addition to the color variations, the other predominate differences between gondolas is the location of the lettering. The 'N' in 'NYC' can begin in either the second or third panel.

Except for the pink gondola from the girl's set, none of the variations listed below can be considered rare or hard to fine. The length of these gondolas are approximately 10 1/2" long (coupler to coupler).

Black - Shown in the photo above - Almost all black gondolas are a painted variety. Some unpainted (molded black) ones do exist, but they are hard to locate. The black version is estimated to run from 1949 - 1956. All black gondolas have the 'N' in 'NYC' beginning in the second panel.
Red - Similar to the black gondolas, almost all red ones are a painted variety. Unpainted red gondolas do exist and are much more common than the unpainted black gondolas. The production cycle is estimated to run from 1950 - 1957. The red gondola can be found with the 'N' in 'NYC' beginning in either the second or third panel. The second-panel version is from the 1950 - 1954 era while the third-panel version is from 1955 - 1957. The unpainted red gondola is from the end of the production cycle and includes the 'N' in 'NYC' in the third panel. 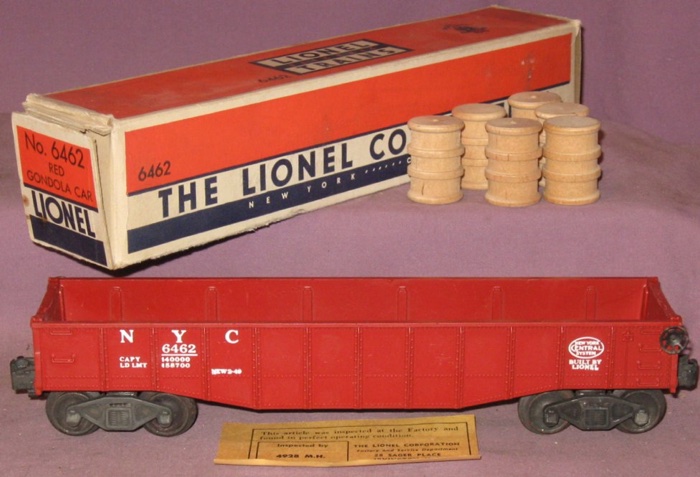 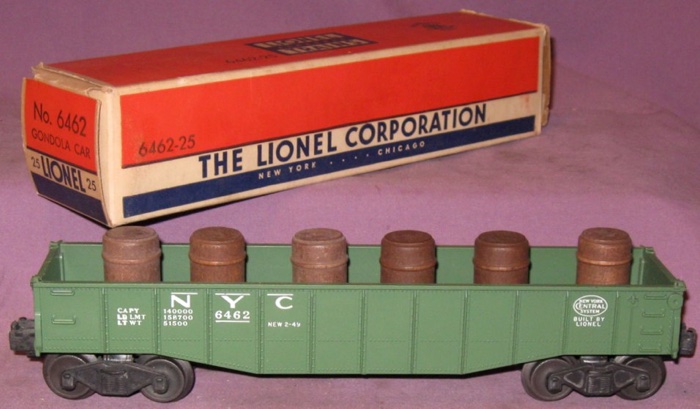 Pink - All pink gondolas are a painted variety and have the 'N' in the third panel. Over the years, this gondola has become known as the 'Girl's Gondola.' The production cycle is estimated to be both 1957 and 1958, but the 1958 inventory is probably only 1957 production which did not sell in the first year. This is a very desirable and hard-to-locate gondola. 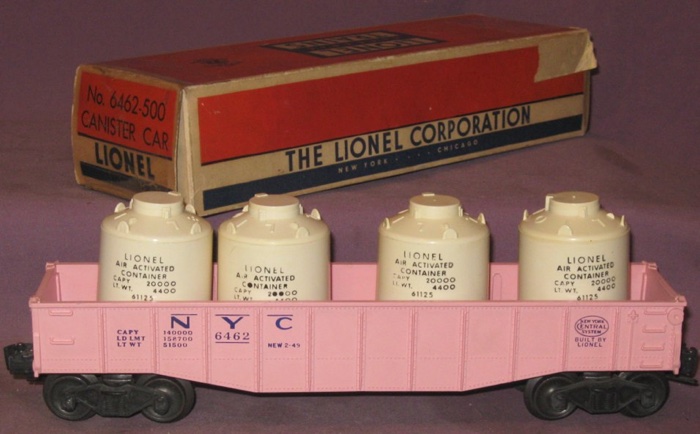