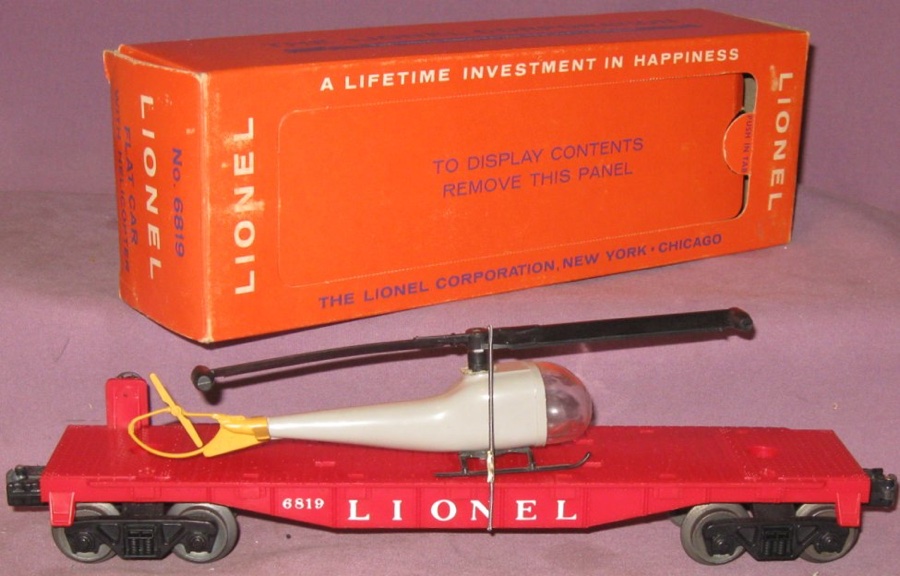 History
The 6819 Flatcar with Helicopter was available for two years and is essentially a non-operating version of the popular 3419 flatcar with an operating helicopter. This low-cost freight car was included in several catalogued Lionel freight sets spanning 1959 and 1960. Additionally, Lionel also included this flatcar and helicopter with set X-240, an uncatalogued outfit from 1960.

Because the 6819 is a non-operating freight car, operator interest for this item remains low. However, due to such a short production run, the 6819 flatcar with an original helicopter is much harder to find compared to many of the other Lionel flatcars with helicopters.

The 6819 is part of Lionel's "Space & Military" series. As with many of the items from that series, there are delicate parts that are prone to damage due to improper handling. Locating a complete, all original flatcar with helicopter is a difficult task as few helicopters have survived intact.

Features
Standard features of the 6819 include: unpainted red flatcar with white lettering, AAR trucks plus a brakestand with metal brakewheel. This freight car did not include a black tail stand commonly found on other helicopter freight cars. However, Lionel used an elastic band to secure the copter to the freight car.

Only Known Variation - All flatcars were unpainted red with a helicopter containing a single blade.