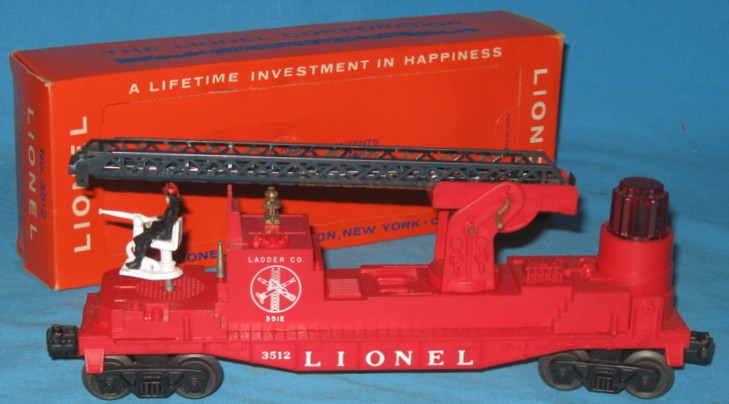 History
The 3512 Fireman and Ladder Car was produced for three years, 1959 thru 1961. It is another creative example of Lionel designers and engineers using components from existing freight cars -- as well as new components -- to create a new product. As the Fireman and Ladder car travels along the rails, the fireman rotates 180 degrees while in his chair and the red lens is illuminated by hidden slotted hood located over a light bulb. This is an interesting freight car and loosely based upon real-life equivalents.

Although not part of the popular "Space & Military" series of the late 1950's, it does share many similarities with those items. Specifically, there are several delicate parts that are prone to damage due to improper handling. For example, the revolving fireman, side ladders and three tiny nozzles are fragile and easily broken -- sometimes missing altogether. In addition, the rubber O-ring on the specially designed AAR truck is often lost or has melted. Locating a complete, all original Fireman and Ladder car is a difficult task as few have survived intact.

Features
Standard features of the 3512 include: unpainted red flatcar with white lettering, red superstructure, operating couplers, a specially designed AAR truck to operate the fireman plus a brakewheel stand without the common metal brakewheel.

The red superstructure included a black fireman with painted facial features -- which oscillates 180 degrees as the car travels along the rails -- two metal ladders, three tiny nozzles, a red lens with a light and rotating inner cover plus a gold simulated bell. The ladder mechanism which raises and extends the ladder is very fragile and generally damaged, broken or missing.

Only Known Variation - All 3512's have unpainted red flatcars with a red superstructure mounted on top of the flatcar.