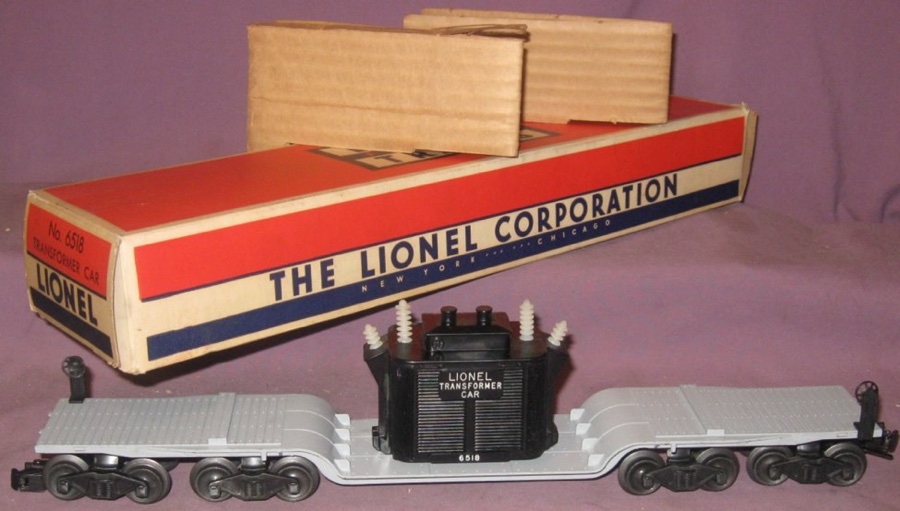 History
The 6518 Transformer car was produced by Lionel for three years and is a fairly accurate reproduction of a real railroad car designed to haul large and heavy cargo.

The 6518 used the same flatcar as the 6418 introduced in the prior year -- 1955. Unfortunately, the transformer on the 6518 looks small -- and almost out of place, especially when compared to the larger girder bridge sections which were included on the 6418. In either case, both the 6418 and 6518 are pursued by collectors due to their fragile and often missing or damaged loads.

As with Lionel's other transformer cars -- the 2461, 6461 and 6818 -- all transformer insulators are extremely fragile. It is difficult to find this car with original and undamaged insulators.

Features
The 6518 Transformer car has the following standard features: painted gray flatcar without lettering or numbering on the flatcar, four bar-end trucks, two magnetic couplers plus a brakewheel stand and brakewheel at each end.

Additional Detail, Photos & Box Information
Locating a complete and original box for this car is rare. Due to the length of the box, most were damaged, squashed or simply torn. A complete box will add a significant premium to the value of the item.

Only Known Variation - Shown in the photo above - All 6518's have a gray painted flatcar and black transformer.