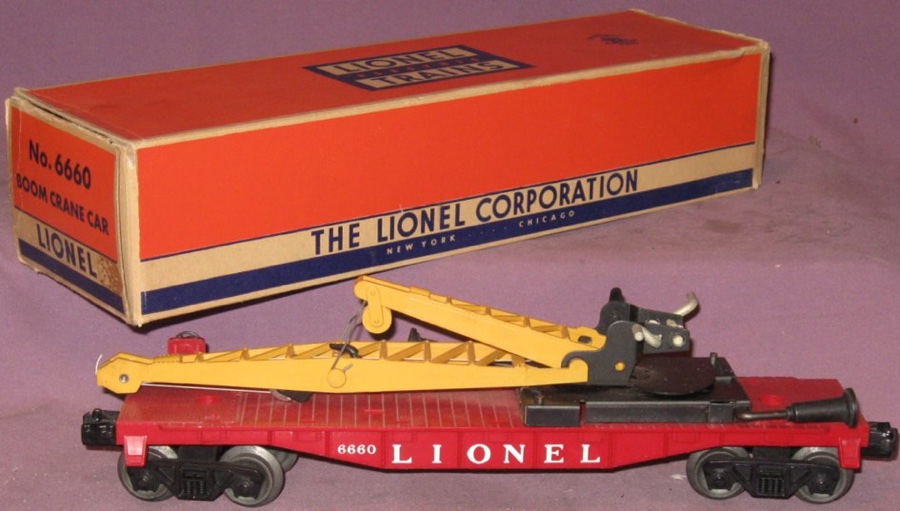 History
The 6660 Boom car was only available for one year, 1958. Many people -- incorrectly -- believe this was Lionel's 1958 version of the crane car. Although it does resemble a crane car, the boom car is a unique-looking freight car with a slightly different purpose. On real railroads, the boom car is generally coupled to either a gondola, flatcar or work caboose.

Lionel continued to produce a crane car in the late 1950s under the number 6560.

Features
The 6660 Derrick car has the following standard features: unpainted red flatcar with white lettering, AAR trucks with two operating couplers, a yellow boom with metal hook plus a brakewheel stand and brakewheel.

Also included -- which differentiates this car from the 6670 -- is a steel base which attaches the manually rotating boom to the flatcar. Also included on this steel base are two movable and functional outriggers.

Additional Detail, Photos & Box Information
This is one of only a select few postwar items produced for a single year, yet there are two different box variations. The earlier Late Classic version is harder to locate compared to the Bold Classic box.

Only Known Variation - All are unpainted red with white letters and a yellow boom assembly.