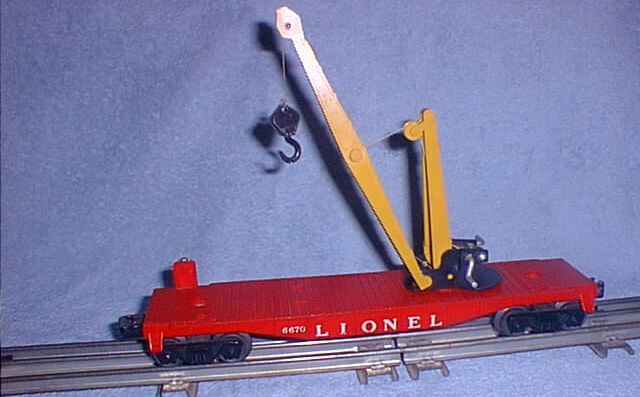 History
The 6670 Derrick car was introduced by Lionel in 1959 and remained in the product line for two years. The 6670 is basically a stripped down version of the 6660 Derrick car.

Many people (incorrectly) believe this was Lionel's 1960's version of the crane car. Althought it does resemble a crane car, a derrick car is actually a slightly different style freight car. Lionel did continue to produce a crane car in the 1960's under the number 6560.

Features
The 6670 Derrick car has the following standard features: unpainted red flatcar with white lettering, AAR trucks with two operating couplers, a yellow boom with metal hook plus a brakewheel stand and brakewheel.

Only Known Variation - Shown in the photo above - All are unpainted red with white letters and a yellow derrick assembly.