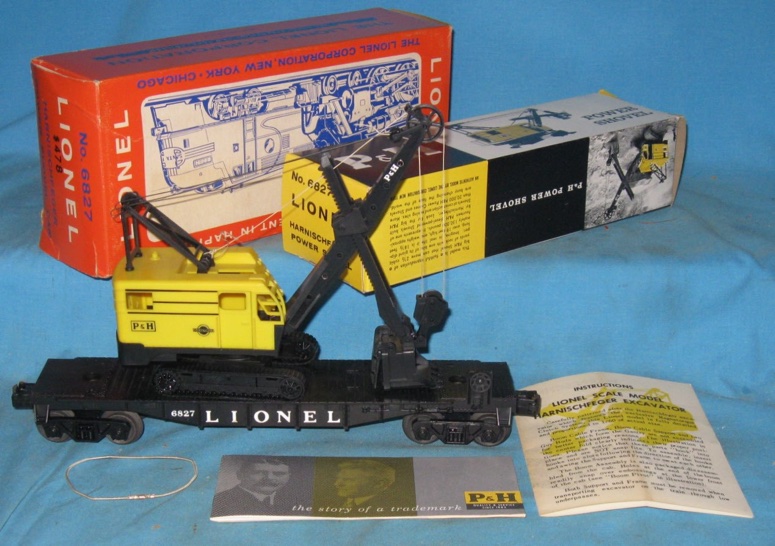 History
The 6817 Flatcar with Harnischfeger Power Shovel is based upon a typical freight car seen on the rails in the United States throughout the 1950's. As America began to expand from local cities into a suburban America environment, construction companies used the railroads to transport their heavy equipment from the cities to the suburbs.

In their continued effort to remain current with the times, Lionel introduced several flatcars in 1959 and 1960 with construction-themed loads. They include:

The 6827 Harnischfeger Power Shovel load is extremely fragile and truly rare to find unbroken and in complete condition. Like most postwar flatcar loads, the flatcar is easy to locate, however the value with this freight car is with the motor scraper.

Features
Standard features of this car include: unpainted black flatcar with white lettering, a brakewheel stand with metal brakewheel, corner footsteps, AAR trucks with operating couplers and a power shovel.

Finally, this freight car included an booklet titled P & H: The Story of a Trademark as well as original instructions which included typical black print on white paper, but with a light yellow image of a power shovel printed on the first page. Locating a complete, undamaged power shovel with original box and all paperwork is rare.

Only Known Variation - Shown in the photo above - All 6827's have a black flatcar with yellow power shovel.