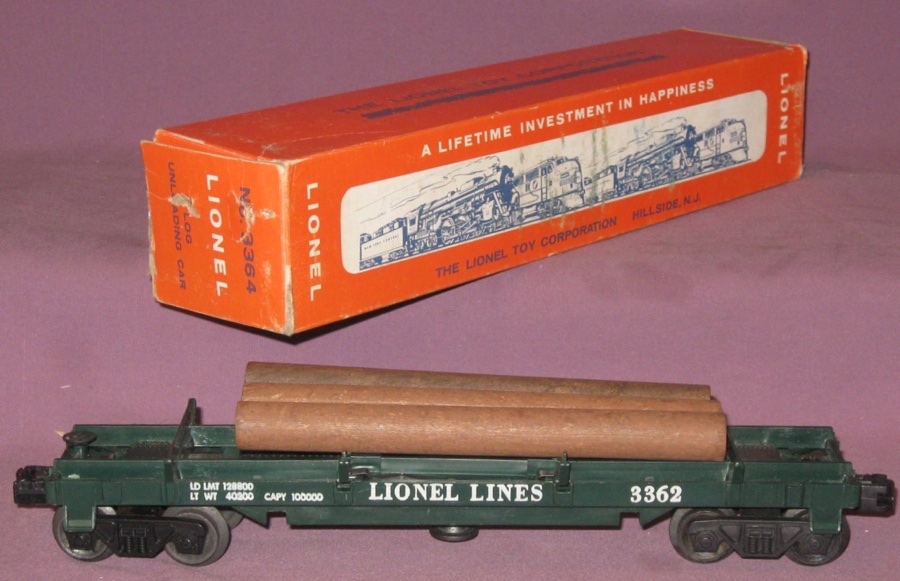 History
The 3364 Log Dump Car was introduced in 1965, very late in the postwar era as far as a new freight car. However, when you look at the details, it become obvious the history behind this freight car.

In an effort to save money as well as sell excess inventory, Lionel simply used unsold 3362 Helium Tank cars from the prior year or two, switched the load to three logs versus three helium tanks and printed a new box labelled 3364. Thus, the 3364 Log Dump car was created!

Features
Standard features of the 3364 included: unpainted green frame with white lettering and always labelled 3362, AAR trucks, three stained logs and an unloading unit which required a manual reset after activation. The car was produced with two functional couplers as well as one functional & one non-functional coupler.

Additional Detail, Photos & Box Information
It is interesting to note, Lionel never produced a flatcar with the number 3364 printed on the side. Additionally, the original box for this freight car is very difficult to locate and worth far more than the freight car itself.

Only Known Variation - Shown in the photo above - All 3364's have the 3362 number with three wooden logs.