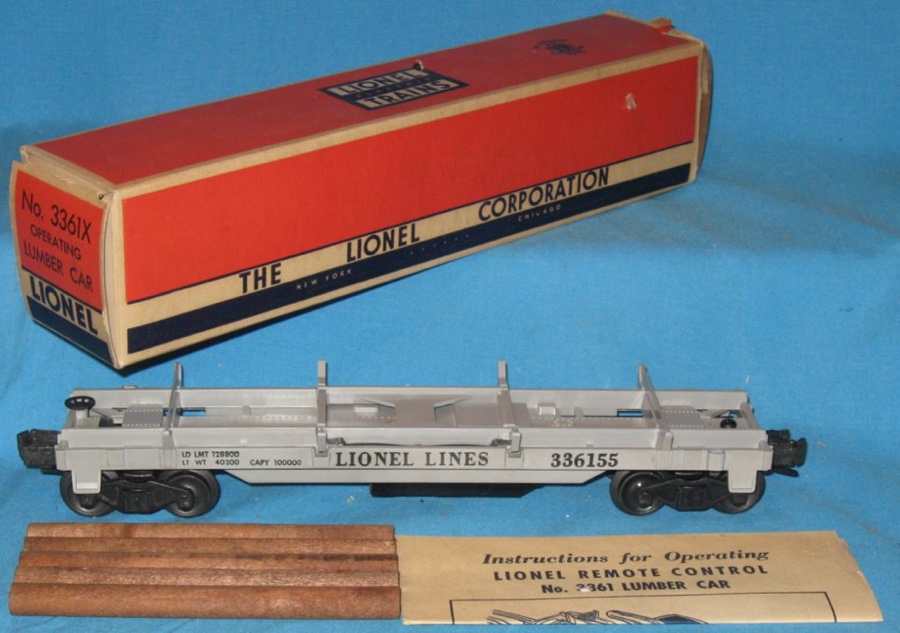 History
The 3361 Log Dump flatcar was introduced in 1955. It always included five stained logs as the regular load. The 3361 log dump flatcar replaced the 3461 as the standard log dump car in Lionel's product line.

Features
Standard features of the 3361 included: unpainted gray frame with black lettering, two operatng bar-end trucks and an unloading tray. The tray was automatically set to the lower position by pressing the unload button one additional time after the tray was at the highest unloading point.

Five stained logs were always includes with the 3361. Wheather sold as a spearate sale item or in a set, the 3361 always included a # 160 Dump Bin. For the first half of production Lionel included the shorter version of the dump bin while the second half included the longer version. Additionally, the number on the car is always 336155. The last two digits representing the year the item was introduced -- 1955 for this car.

Additional Detail, Photos & Box Information
Variations of the 3361 involve the style of lettering and location of the numbers '336155'. The lettering can be either the serif or sans-serif version while '336155' is found either to the left or right of the lettering. All combinations of letter style and number location appear common and none are unusual or rare.

Sans-Serif Lettering, Number on Left - Slightly less common compared to the version with the number on the right.