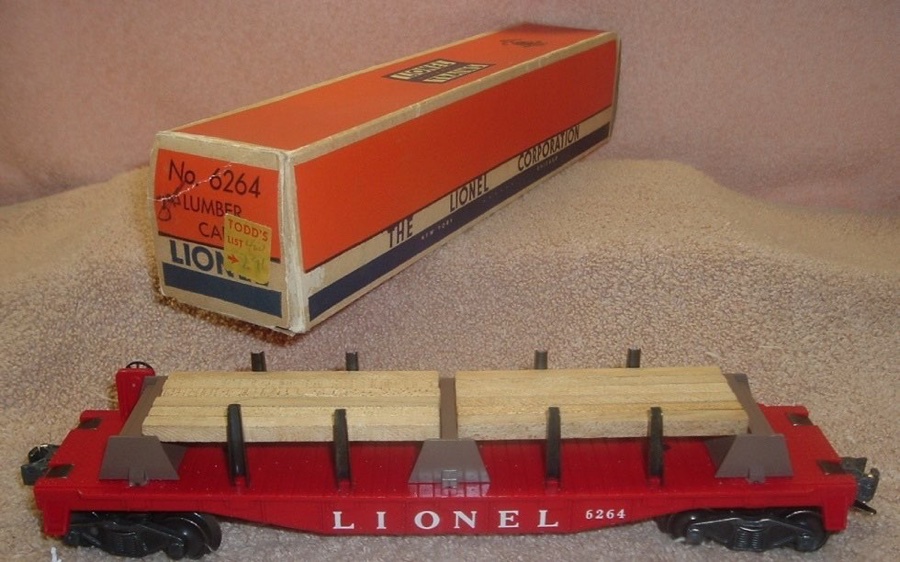 History
The 6264 Lumber Car was introduced in 1957 and only manufactured for two years. It's based upon a real-life flatcar used by many railroads during that era for the transportation of railroad ties.

The Lumber Car was one of the final flatcars produced in the mid-1950's which carried a realistic load seen on the real railroad of the day. Freight cars such as the 6262 Wheel Car, 6311 and 6511 Pipe Car and 6414 and 6424 Automobile Car are still valued by collectors and operators today. Their loads are realistic and make for a nice freight train. Beginning in 1958, Lionel switched the theme of flatcar loads to the more whimsical Space & Military items.

Features
Standard features of the 6264 included: a red molded flatcar with white lettering, three brown superstructure supports used to hold the lumber in place, corner simulated footsteps plus and a brakewheel and brakestand. Also included were 12 small peices of lumber and eight metal stakes.

The 6264 is commonly found with bar-end trucks and operating couplers. As Lionel transitioned it's freight cars to AAR trucks in 1958, the 6264 was eventually converted to AAR trucks.

Locating an original box for the 6264 freight car is almost impossible. It's a rare box and easily sells for multiple times the value of the actual freight car.

Bar-End Trucks - Shown in the photo above - The common version of this car has bar-end trucks.
AAR Trucks - Significantly less common is the Lumber Car with AAR trucks.