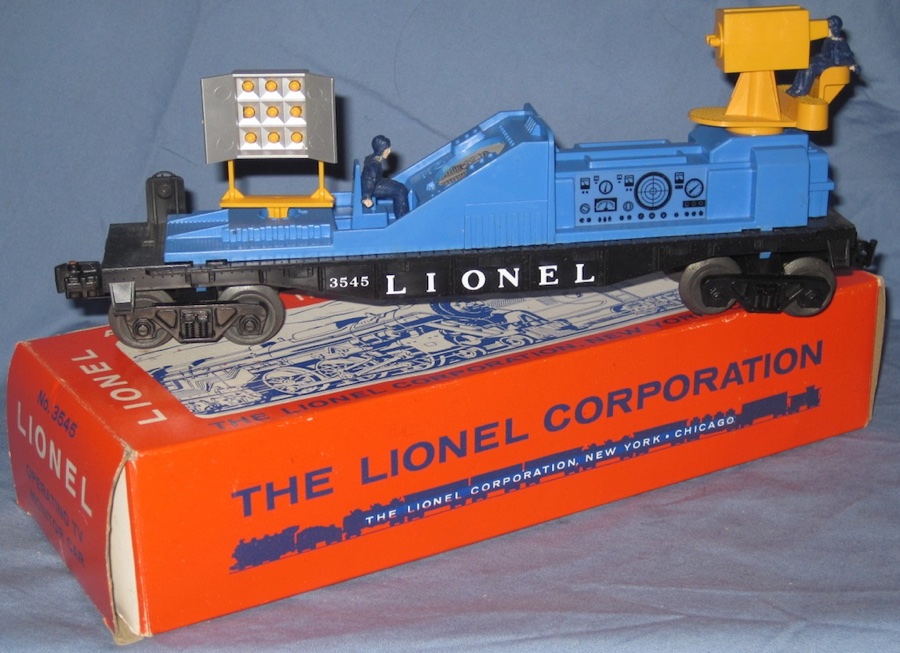 History
The 3545 TV Monitor Car was produced for two years and is another creative example from the Lionel designers and engineers using components from an existing freight car to create a new product. In the case of the 3545, many components were carried forward from the 3540 Radar Scanning Scope Car.

The 3545 does not require any special track or add-on components to operate. As the TV Monitor car travels along the rails, the camera man continually rotates based upon an O-ring connected to one set of axles. Additionally, the operators screen is illuminated while the track power is on. Although this is an interesting concept, the freight car does not have a real-life equivalent.

The 3545 is part of Lionel's "Space & Military" series. As with many of the items from that series, there are delicate parts that are prone to damage due to improper handling. For example, the revolving camera man and simulated floodlights are fragile and easily broken -- many times missing altogether. In addition, the rubber O-ring on the specially designed AAR truck is often lost or has melted. Locating a complete, all original TV Monitor car is a rare task as few have survived intact.

The blue superstructure includes a yellow TV monitor that rotates as the car travels along the track, a bank of simulated floodlights which can be manually rotated, blue man plus a white illuminated screen.

Only Known Variation - All 3545's have unpainted black flatcars with a blue superstructure mounted on top of the flatcar.