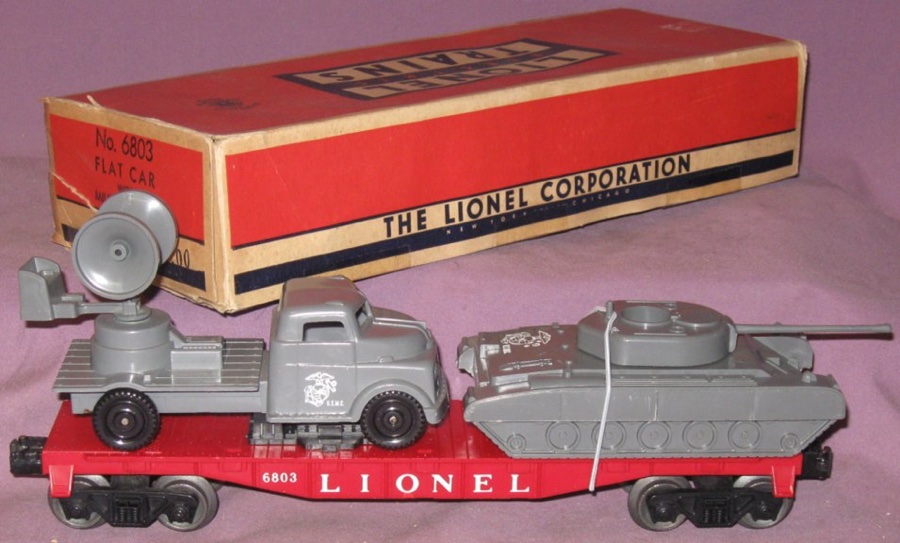 History
In 1958, Lionel introduced a series of six flatcars containing USMC (United States Marine Corps) vehicles. The freight cars and their loads are fairly realistic models based upon real-life trains transporting military vehicles for the Marines.

Unfortunately, the series was short-lived and only remained in Lionel's catalogue through 1959. Each flatcar was red and generally contained two gray vehicles. Below is a summary of all six freight cars:

All of the above freight cars are part of Lionel's "Space & Military" series. Since the series was only available for two years, these items are difficult to locate. The vehicles are fragile and generally found either missing or damaged. Original, unbroken vehicles will command a premium.

Features
The 6803 Flatcar with Tank and Sound Truck has the following standard features: unpainted red flatcar with white lettering, AAR trucks with operating couplers plus a brakewheel stand and brakewheel.

The Tank and Sound Truck loads were produced outside of the Lionel Corporation by a company named Pyro Plastics. In addition to selling these vehicles to Lionel for their freight cars, Pyro Plastics also sold the vehicles to the public under their own company name. As mentioned above, the loads are fragile and original, undamaged loads will command a premium.

Buyers of these freight cars should be aware reproduction loads are available and have been produced to resemble original loads from the 1950's.

Only Known Variation - Shown in the photo above - All 6803 flatcars are unpainted red and have a Tank and Sound Truck as the USMC load.